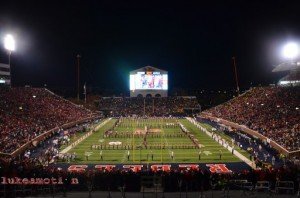 Ole Miss looked like a top 5 team Saturday night beating Alabama 23-17.  It was the first win for Ole Miss against Alabama since 2003.

Bo Wallace had a great game for the Rebels no turning the ball over, which is unusual for him.  Wallace completed 18 passes for 251 yards and three touchdowns.  The biggest play of the game was when Wallace hit tight end Evan Engram for a 50 yard pass.  That set up a touchdown to make  make the game 14-10 in Alabama’s favor.  Engram finished the game with three receptions for 71 yards.  Laquon Treadwell made an impact catching five passes for 51 yards and a touchdown.  The Rebels struggled running the ball with only 72 yards rushing, but made up for it with 251 passing yards.  Ole Miss will more than likely be a top 5 team come Sunday.

The Crimson Tide made way to many mistakes in the game.  Alabama had eight penalties for 52 yards and turned the ball over twice.  The key turnover came on the kickoff after Ole Miss tied the game at 17.  Ole Miss had just got an unsportsmanlike penalty and Alabama was set to have great field condition.  Christion Jones received the kick and made it to the middle of the field when Channing Ward forced the fumble for Ole Miss, with Kailo Moore recovering.  T.J. Yeldon ran for 123 on 20 carries for the Crimson Tide.  Blake Sims didn’t throw any touchdown passes, but was able to run one in.  Sims threw for 228 yards on 19 completions, he threw an interception on Alabama last drive which sealed the deal for Ole Miss. I think that Alabama should have tried to attack the Rebels more vertically at the beginning of the game.  But there was no doubt that the penalties cost the Crimson Tide the game.  Alabama will remain a top 10 team, but don’t be surprised if you see them only move back to sixth or seventh.

Alabama will have a chance to rebound next week when Arkansas comes to town.

Ole Miss will have to travel to play at Texas A&M, who’s coming off a lose to Mississippi State.