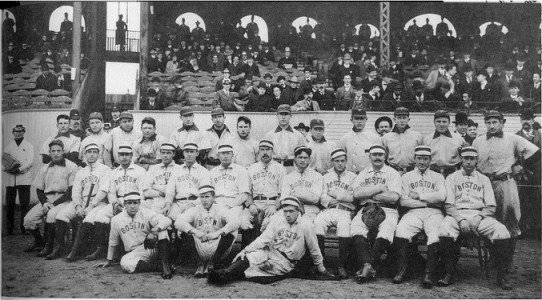 What Made the 1903 Boston Americans Great

In 1903 there was just 16 teams in the Major League Baseball, but it was still very difficult to win the World Series. There was no Wild Card or Championship Series, it was the best team in each league meet in the World Series. Boston relied on their pitching more than anything, leading the league with a 2.57 team ERA and allowing only 505 runs the whole season. The pitching staff featured one of the greatest pitchers to every play the game in Cy Young. Young led the league in wins (28), complete games (34), shutouts (7), and he finished second in ERA (2.08).

Jimmy Collins
Collins was considered by most to be the best third baseman in the game coming into the 1901 season, and Boston offered him the manager job.  Collins accepted the offer and got a salary of $5,500 (147,974.45 in 2014) with a signing bonus of $3,500 (94,165.56 in 2014), and he also got a cut of the team’s profits. Collins played an instrumental role in bringing Cy Young to Boston. In his first season as a player-manager and team captain he led the Americans to a second place finish, with the Chicago White Sox beating them out by four games. Collins played in 108 of the team’s 137 games because of an injury, but he did become the first player in Boston’s history to hit a inside the park grand slam that season. He led the Americans to the 1903 World Series, which was the only one that Collins would win in his career.  Collins was inducted into the Baseball Hall of Fame in 1945 by the Veteran’s Committee.

Henry Killilea
Killilea wasn’t just the owner of the Boston Americans, he was one of the five founders of the American League in 1899. Killilea was a criminal and civil lawyer in Milwaukee, Wisconsin. He was considered one of the better lawyers in the town. Killilea was extremely active in sports, playing college football and baseball at the University of Michigan. He graduated from Michigan in 1885 and admitted to the Wisconsin bar. He gained his fame by winning an acquittal of a teacher that was accused of murdering a student and followed that up by becoming a corporate lawyer for some of the city’s largest industries.
He was an investor in the first Milwaukee baseball franchise in a new league, which was called the Western League founded by Ban Johnson in 1893. In 1899 Johnson, Charles Comiskey, and Connie Mack met at Killilea house to discuss changing the name to American, and putting a team in Chicago to challenge National League. Killilea wrote up the articles of incorporation and notarized them. In 1901 Killilea sold is stake in the Milwaukee franchise for a reported $40,000 ($1,076,177.83 in 2014) to a St. Louis group, after Johnson announced the team would move to St. Louis.
Killilea headed a group in 1902 that would purchase Boston from Charles Somers for around $60,000 ($1,614,266.75 in 2014). Boston made about $60,000 the first year, and Killilea was offered $100,000 ($2,690,444.58 in 2014) to sell the franchise, but he had not intention of selling. Killilea was called “the godfather of the American League” as he played a major role in the peace agreement that led to the World Series being formed. Killilea spent around $56,000 ($1,445,153.09 in 2014) on player salaries in 1903, which was the most in baseball at that time and it seemed to pay off with the Americans winning the inaugural World Series.

Hall of Famers on Team 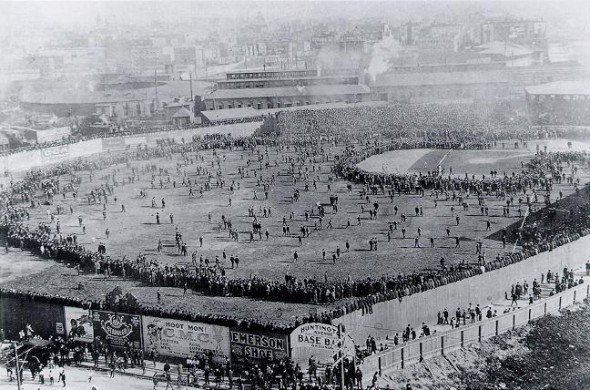 The 1903 Boston Americans played at the Huntington Avenue Grounds (pictured above) in Boston, Massachusetts.  The stadium was also the first home for the Boston Red Sox, who were the Americans until 1908.  The stadium was built for $35,000 and opened on May 8, 1901. The stadium also had a tool shed in deep center that was in play.

The Huntington Avenue Grounds was the site of the first perfect game in the modern era, with Cy Young throwing it on May 5, 1904. The stadium was demolished in 2012 and the Red Sox moved to Fenway Park, where they’ve played ever since. 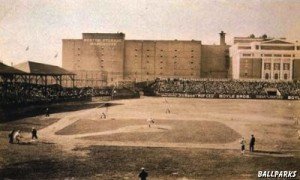 Game 1
The Pirates started off the first World Series with a bang, scoring six runs in the first four innings. Jimmy Sebring would hit a solo home run in the seventh to give Pittsburgh the 7-0 lead. Boston scored two runs in the bottom half of the inning, but it was too late and the Americans would fall to the Pirates with a final score of 7-3. Both Deacon Phillippe and Cy Young pitched complete games, with Phillippe striking out ten and Young striking out five. Young gave up 12 hits to the Pirates, which was twice as much as his counterpart.

Game 2
The Pirates struggled to get anything going offensively in Game 2, collecting three hits and getting shutout by the Americans. Boston pitcher Bill Dinneen struck out 11 and pitched a complete game, with Patsy Dougherty hitting two home runs in the first and sixth innings to give Boston the 3-0 victory. Pittsburgh pitcher Sam Leever pitched the first inning, but he was forced out after the inning and Bucky Veil took over and finished the game for the Pirates.

Game 3
Deacon Phillippe pitched a complete game yet again for the Pirates, but this time he did it on just one day of rest. The Pittsburgh righty gave up two runs on just four hits. Tom Hughes started the game for the Americans giving up three runs on four hits. Hughes was pulled from the game after the second inning and Cy Young replaced him. Young keep the game close, giving up just one run in the final seven innings of the game. Pittsburgh had a big game at the plate, with five of their seven hits being doubles. Boston collected four hits, with two of them coming from star third basemen Jimmy Collins.

Game 4
Pittsburgh came into game four with a 2-1 lead in the series and went to their ace Deacon Philllippe to pitch his second straight game, this time on two day rest. Phillippe threw his third complete game of the series, giving up four runs on nine hits. It was his worst outing of the series so far, but the Pittsburgh offense gave him the victory with a big seventh inning. Honus Wagner finished the game going 3-for-4 and Tommy Leach finished the game going 2-for-4 with three RBIs. Leach had the biggest hit of the game in the seventh inning, with one out he hit a triple to deef right field driving two runners in to score. Boston pitcher Bill Dinneen gave up 12 hits in eight inning, striking out seven. 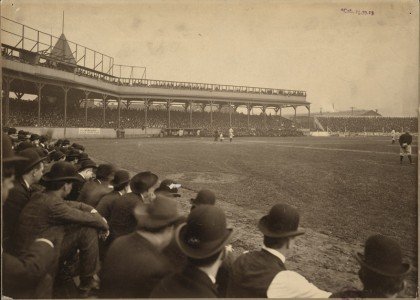 Game 5
Game 5 looked like a pitcher duel early, with both pitchers throwing shutouts through five innings. Boston pitcher Cy Young pitched a complete game, giving up two runs on six hits, while Pittsburgh pitcher Brickyard Kennedy didn’t have such luck, giving up 10 runs on 10 hits in seven innings. Boston scored 10 runs in the sixth and seventh inning combined. The Americans hit five triples in the game, with Young hitting one of them, he also drove in three runs in the game. Patsy Dougherty hit two triples and drove in three runs in the game. The Americans finished the game with 13 hits, which would be a series high.

Game 6
Bill Dinneen got a second shot at Pittsburgh pitcher Sam Leever, after he got the best of him in Game 2. Dinneen pitched a complete game, giving up three runs on 10 hits. He was throwing a shutout until Ginger Beaumont hit a single driving in Jimmy Sebring in the seventh inning. Pittsburgh would go on to score two more runs in the inning on a Fred Clarke double, but the couldn’t muster another run. Every player on Boston had a hit except for Buck Freeman, but he did reach base once on an error and also had a sac fly in the fifth. The Pirates defense had three errors, with two of them coming from third basemen Tommy Leach.

Game 7
Deacon Phillippe was back on the mound and looking to win his fourth game in the series (no pitcher has won more then three games in a World Series). Phillips would struggle for the first time in the series, pitching a complete game and giving up seven runs on 11 hits. Cy Young would get his second and his last career World Series win, giving up three runs on 10 hits and pitching a complete game. Boston hit five triples for the second time in the series. Lou Criger drove in three runs on two hits for the Americans. The game was full of errors with the team combining for seven (four by the Americans and three by the Pirates). The series headed back to Boston with the Americans leading the series 4-3.

Game 8
Deacon Phillippe and Bill Dinneen squared off for the second time in the series, with Phillippe winning the first matchup. Dinneen would not allow Phillippe to get the better of him again. He pitched a complete game shutout, giving up just four hits and striking out seven. This was the only World Series that two pitchers won three games each, which is a feat we’ll never see again. For the second straight game the bottom of the order came up big for the Amerinds, with Hope Ferris driving in three runs on two hits to give Boston a 3-0 victory. It was Boston only World Series win as the Americans, they would change their name to the Red Sox on December 18, 1907.