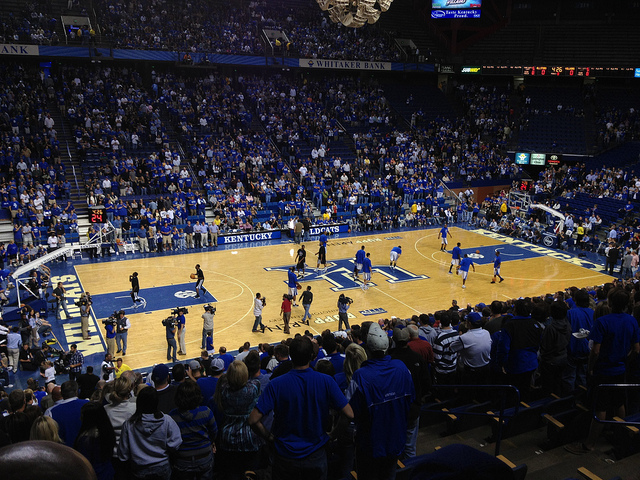 uk all-stars vs villains warmups by Phil Denton is licensed under CC by 2.0

We’re only a couple of weeks away from the start of a new college basketball season. It was an amazing end to the 2013-2014 season seeing a 7 seed UConn Huskies escape from Indianapolis with a 60-54 victory over an 8th seed Kentucky Wildcats. Both teams had their ups and down through the year, but found a way to put it all together and make remarkable runs.

1) Kentucky Wildcats- John Calipari got an unexpected present after the end of last season when Willie Cauley-Stein, Alex Poythress, Dakari Johnson, Marcus Lee, Andrew and Aaron Harrison all decided to return to school. Kentucky is also bringing in four very talented, yet unselfish, recruits in Karl-Anthony Town, Devin Booker, Trey Lyles, and Tyler Ulis. John has, without a doubt, his most talented team since he arrived at Kentucky. Kentucky will have 9 Mcdonalds All-Americans on their team this year, and that doesn’t include Cauley-Stein! The Wildcats looked very impressive during their “Big Blue Bahamas” tour at Nassau in August. The Wildcats played 6 games, against professional teams, in 7 days and suffered only a 1 point loss to the Dominican national team on their last day.   Calapari has already announced that he is going to run the “platoon” system, 5 in and 5 out. It’s been said that if you were to split this Kentucky team in half you would have two top fifteen teams. That’s how good this team could potentially be.

2) Arizona- What more can you say about them than size size size.

3) Duke- Incoming freshman Jahlil Okafor has potential to be the number one overall pick in the 2015 draft. Add Tyus Jones into the mix with Rasheed Sulaimon and Amile Jefferson and Duke has the talent to make a big push in March.

4) Wisconsin- Returning senior Frank Kaminsky has to be on the short list for the Wooden Award. Kaminsky gave Kentucky all they could handle in the final four matchup. They lose sharp shooter Ben Brust but look for Traevon Jackson to really carry the load for the Badgers this season.

5) Kansas Jayhawks. The Jayhawks lost two foundation pieces in Andrew Wiggins and Joel Embiid to the NBA draft, but don’t expect them to miss much of a beat in this new season. The Jayhawks bring in a 6’7 small forward in Kelly Oubre who is just oozing with athletic ability. Add Cliff Alexander to the mix with the return of Wayne Selden and Perry Ellis and the Jayhawks should be the front runner for their 11th straight Big 12 regular season title.