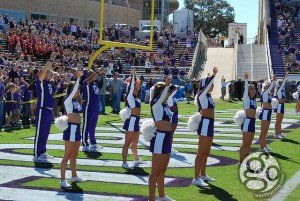 Faces in the Crowd by WorthGoing.com is licensed under CC by 2.0

TCU last beat Oklahoma in 2005, and had lost three straight to the Sooners coming in to the game.  You could tell from the kickoff that the Horned Frogs didn’t want to make it four, as they got off to a fast 14-0 lead in the first quarter.  Oklahoma would score two touchdowns to tie up the game in the first quarter, on a one yard run by Samaje Perine and a 75 yard pass by Trevor Knight to Sterling Shepard.  The two teams would continue to swap points the rest of the game, one would score than the other.  TCU played like a top 10 team and might be the best team in the Big 12 this season, but they will have to get thru Baylor next week.  Oklahoma kicked a field goal as time expired in the second quarter to tie up the game at 24.  The Sooners than came of the locker room and went 80 yards down the field in 5:32 to score a touchdown on a seven yard run by Perine.  That touchdown gave Oklahoma a 31-24 lead and they looked to be in control, but the Horned Frogs wouldn’t give up.  TCU took the ball right down the field and tied the Sooners up at 31.  TCU linebacker Paul Dawson than picked Knight off and took it 41 yards back for a touchdown.  The extra point was blocked by Oklahoma and returned to make the score 37-33 and that would be the final.

The Horned Frogs quarterback Trevone Boykin completed 20 of his 38 passes for 318 yards and two touchdowns, and he threw an interception.  Boykin also ran for 77 yards.  Kolby Listenbee had a big game receiving with five receptions for 103 yards.  TCU finished the game with 469 total yards of offense.  They did make a lot of mistakes being penalized 12 times for 90 yards.  TCU is now the favorite in the Big 12 in my opinion and they should climb very high in the rankings.

It was an unfortunate lose for the Sooners, but on the bright side Freshman running back Samaje Perine ran for 87 yards on 25 carries and had three touchdowns.  They might be using Perine a little too much though, and I think Stoops should try and find another running back to split the carries with Perine.   Sterling Shepard had his biggest game of the season, with seven receptions for 205 yards and a touchdown.  Oklahoma is still a very good team, but they will need to win out to have any shot at the playoffs.  I think that they are out of the race, but you never know especially after how crazy this weekend was.

TCU will travel to #7 Baylor an a matchup that could potentially decide the Big 12.

Oklahoma will play Texas next week in the Red River Rivalry, the Sooners got upset last season by the Longhorns 36-20.