#7 Alabama survives a close one - Fueled by Sports 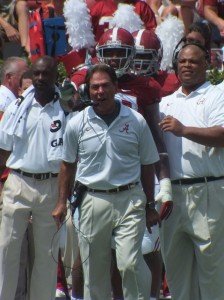 Alabama vs Florida Atlantic by Kent Russell is licensed under CC by 2.0

Alabama survived a scare in Fayetteville, beating Arkansas 14-13.  The Crimson Tide played a very sloppy game and didn’t look like a top 10 team Saturday night.  Bama had their worst game offensively of the season mustering only 227 yards of total offense.  If it wasn’t for the great play of the Alabama defense they would have lost this game handily.  The Razorbacks made some huge mistakes too.  Alabama scored the go ahead touchdown with 12:36 left in the game on a touchdown pass by Blake Sims to DeAndrew White.

Alabama turned the ball over twice,  fumbling on two punts.  The Crimson Tide was able to force three turnovers and was their best game of the season in that department.  The Crimson Tide have some holes on the offense right now that need to be addressed and their offensive line struggled most of this game.  The secondary looked good this week, but the Razorbacks aren’t known for throwing the ball.  We will see how good they really are next week, when they face Kenny Hill.

Blake Sims threw two touchdown passes, but made many mistakes and tried to force a lot of passes.  Sims is lucky he didn’t throw three or four picks, he looked that bad.  Sims ended up with 161 yards on 11 completions.  T.J. Yeldon ran for 45 yards on 16 carries and Derrick Henry ran for 25 yards on seven carries. Yeldon caught two passes for 35 yards and a touchdown.  Amari Cooper finished with two catches for 22 yards.  Reggie Ragland had a big game for the Tide defense with 12 tackles.  Jonathan Allen had the biggest play of the game, blocking an Arkansas extra point.

Arkansas quarterback Brandon Allen threw the ball 40 times completing it 21 times for 246 yards and a touchdown.  Allen last pass was picked off by Landon Collins with less than two minutes left in the game.  The Arkansas running game didn’t look like themselves, rushing for 89 yards.  Jonathan Williams led the team with 83 yards on 20 carries and a touchdown.  AJ Derby had a big game receiving, with four catches for 77 yards and a touchdown.

Arkansas (3-3, 0-3) will host the #13 Georgia Bulldogs.  The Bulldogs are coming off a 34-0 shut out against #23 Missouri.  The Razorbacks have now lost 15 straight conference games and will look to break that streak next week.

Alabama (5-1, 2-1) looked like they didn’t want to be their tonight and are lucky they don’t have a losing SEC record.  They will host #14 Texas A&M next week in a most win game and they won’t win if they play like they did tonight.