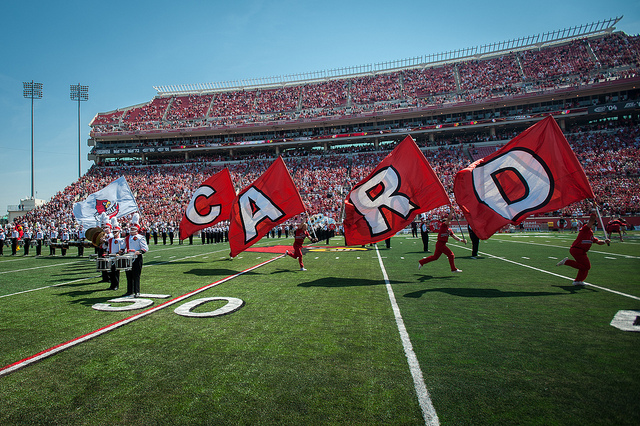 University of Louisville by Kentucky National Guard is licensed under CC by 2.0

I did okay in the ACC last week going 2-2, with North Carolina and Georgia Tech both surprising me.  This week will be great week in the ACC and could end up deciding if the conference will have a team make the playoffs.  The number two team in the country Florida State travels to play the number 25 team in the country Louisville.  Louisville comes into the game with the top ranked defense in the country and with both of their losses coming on the road and by less than six points.  Louisville has only scored over 34 points once this season and it was against Murray State.  The Cardinals have struggled on offense and that could be a deciding factor in this game.  Florida State has won 23 straight games and are coming off a big victory at home against Notre Dame.  The Seminoles are ranked is ranked 44th in the county in total offense.  They also are ranked 14th in the country in passing yards per game.  The key for Louisville in this game is to stop Jameis Winston of course, but they will also need to put up some points.  Florida State key is to pass the ball, but that will be tough too as Louisville has the 10th best passing defense in the country.  Florida State has struggled at time this season, but have found a way to win every game.  Clemson and Notre Dame rank in the top 15 in points allowed per game and both teams had control until the end.  The Seminoles lucked out and played both of those games at home.  On the road in a hostile crowd, I expect the number two team to lose.

Duke has been stellar this season, with their only loss coming at Miami (FL).  David Cutcliffe has down a great job turning this basketball school into a football school too.  The Blue Devils will have to travel and play the inconsistent Pittsburgh Panthers.  Pitt has lost four of their last five games, with their only win during that span coming at home against Virginia Tech.  Pitt has not scored over 28 points this season and that was in a lose last week to Georgia Tech.  Duke has surprised me this season with their defense which currently ranks fifth in scoring defense.   Duke should have no problem in this game and improve to 7-1 on the season.

There are plenty of good games this week in the ACC, but one game I find interesting is Virginia at Georgia Tech.  Virginia has one of the better defenses in the country and are ranked 21st.  The Cavaliers have a bright future ahead of them, with so many young players, but their offense is weak.  They have not scored over 33 point this season.  Georgia Tech is scoring 37 points per game, which ranks 22nd in the country.  Georgia Tech is coming off a big win against Pitt, after losing two straight to Duke and North Carolina.  I look for Georgia Tech to win this game in a close one because I think that Virginia offense will struggle to score points.

Al Golden is starting to turn Miami (FL) around and this season they have been led by a freshman quarterback, Brad Kaaya.  The Hurricanes have a bright future ahead of them, but this week they go up against North Carolina.  The Tar Heels have struggled this season and lost four, before ending the streak three weeks ago.  North Carolina comes into the game averaging a little over 37 points per game, but their defense has been awful allowing 41 points per game.  I expect Miami to when this game behind their young quarterback and star running back Duke Johnson, who is coming off a 249 yard rushing performance last week against Virginia Tech.  Johnson has rushed for over 100 yards in four straight games and scored a touchdown in seven straight.