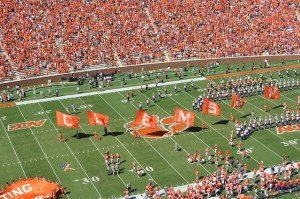 Clemson Flags by Mike Burton is licensed under CC by 2.0

I had a decent week picking the ACC games last week, only missing on two games.  I picked Notre Dame to beat Florida State, but the Seminoles pulled it off late and won the game 31-27.  I also picked Georgia Tech to beat North Carolina, but the Tar Heels showed up for once and beat Georgia Tech 48-43.

Duke beat Virginia by a touchdown last week, as the Virginia offense continued to struggle.  If their offense was as good as their defense the Cavaliers would be a top-25 team.   Virginia will host North Carolina this week, the Cavaliers haven’t allowed over 19 points the last three weeks and have only allowed over 21 points once this season.

Louisville and Florida State are off this week, as they both get ready for their big showdown Thursday.  The game is at Louisville and they’re a very different team at home then they are on the road.

This week game of the week is Georgia Tech at Pittsburgh, both teams are good teams, but have been inconsistent this season.  Georgia Tech has the fifth best rushing offense in the country.  Pittsburgh defense is ranked 14 in the country right now and they haven’t allowed over 25 points all season.

Overall this is a very dull week in the ACC.