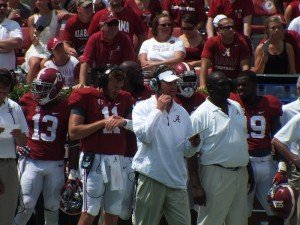 Alabama vs Florida Atlantic by Kent Russell is licensed under CC by 2.0

Alabama dominated the Gators once again in Tuscaloosa.  The Crimson Tide offense put on a performance Saturday night in their 42-21 victory over the Gators.  They torched Florida defense for 645 total yards, 449 of those yards came thru the air.  The Crimson Tide were far from perfect though, turning the ball over four times, three of those led to Florida touchdowns.  You have to think if Bama doesn’t turn the ball over this game is possibly a shutout.

Blake Sims finished the game 23 for 33 with 445 yards, four touchdowns and a interception.  I think its almost time to start talking a little Sims for Heisman, but I will wait till after the Ole Miss game.  For now I will continue to say Cooper for Heisman.  Amari Cooper proved why he’s the best player in the country, he dominated the top corner in the country.  Cooper had 201 yards receiving on 11 receptions and three touchdowns.  Cooper now has 655 yards receiving through four games, he’s is on pace to have close to 2,000 receiving yards this season.  Cooper now has five touchdown catches on the season.  Just to put his season in perspective, in 1991 Desmond Howard had 985 yards receiving and 19 touchdowns.  Howard was the last wide receiver to win the Heisman.  The record for most receiving yards in a season came in 1999 by Nevada’s Trevor Insley with 2,060 yards.  I know this is just the fourth game and that SEC play is about to crank up.  Cooper played against a top defense and dominated today so I think we might see history this season.  Derrick Henry also added 111 yards on 20 carries and a touchdown for the Tide.

The Crimson Tide defense also looked impressive today.  They forced three turnovers, two of them interceptions from Jabriel Washington and Landon Collins.  Florida only had 200 yards of total offense against this defense.  Both of Florida offensive touchdowns started inside of Alabama 31 yard line.  Alabama defense looked a lot better than they did week 1 against West Virginia.  The Crimson Tide looked like the best team in the country Saturday night, they turned the ball over four times and still won by 21.

Jeff Driskel didn’t have any answers to the Alabama defense. He only completed 9 of this 23 attempts for 93 yards. His best pass of the game was a 28 yard touchdown pass to Valdez Showers.  That was his only touchdown pass, he also threw two interceptions.  Florida rushing attack really struggled to ever get anything going. Driskel led the team in rushing with 58 yards.   Florida defense keep them in the game with four turnovers, three of those came in the first half.  Keanu Neal recovered a fumble and returned it 49 yards for a touchdown in the first quarter, which gave the Gators a 14-7 lead.  The Gators had the momentum, but like in years past under Will Muschamp the offense just was not able to move the ball.

Alabama has a bye week next week.  They travel to Oxford to play Ole Miss on October 4.

Florida has a bye week next week. They travel to Knoxville to play Tennessee on October 4.