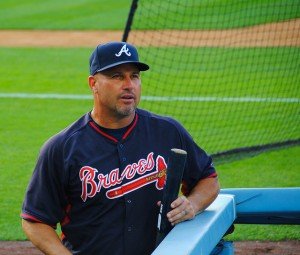 Braves @ Dodgers by LWYang is licensed under CC by 2.0

The Atlanta Braves announced Friday that Fredi Gonzalez will return for his fifth season with the Braves.  Atlanta went 79-83 in 2014, it was the worst season the Braves have had since 2008 when they went 72-90.  They finished tied for second with the Mets in the NL East.  Atlanta was able to win only seven of their final 25 games, and the struggles started long before that.

The Braves are 358-290 in four seasons under Gonzalez and won the division in 2013.  The Braves have never finished below second under Fredi Gonzalez.  This was Gonzalez eight season as manager, his first four where with the Marlins.

The Braves fired Frank Wren with a week left in the regular season, and most though they would fire Gonzalez too.  Atlanta most have plenty of faith in Gonzalez to bring him back.  Interim General Manager John Hart said the Braves are focusing on the 2017 season when their new stadium opens.  I find that comment appalling since the Braves won their division just a season ago, and now it sounds like they could be heading to rebuild mode.  The Braves should be right back in contention next season with a few moves.  The Braves need to get rid of B.J. Upton, he plays with no enthusiasm and plus he flat out can’t hit the ball.

The Braves did make a big move bringing in Bo Porter, the former Houston Astro manager.  Porter will be the third base and outfield coach, he will also be the base running coach.  This already makes the Braves better in my opinion, Porter brings much needed enthusiasm to the Atlanta team.  Porter was 110-190 as the Astros manager, but I think that record doesn’t matter.  Porter did do a good job in Houston with what he had, which isn’t much outside of Jose Altuve, and a few younger players.

I think that Fredi Gonzalez can turn the Braves back around, he has the talent to win a World Series, but will need some veteran leadership if they want to compete next season.