Babe Ruth: Hero in Death As in Life - Fueled by Sports 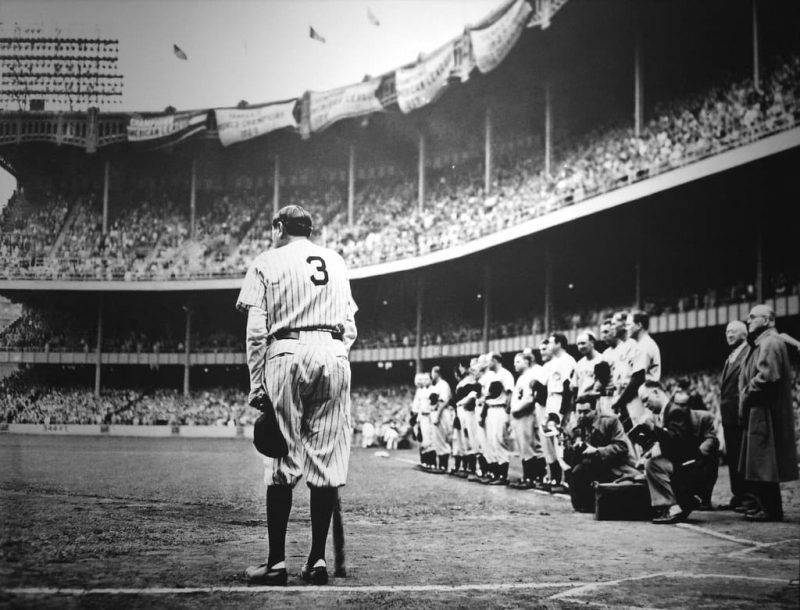 Babe Ruth was America’s greatest sports hero. His exploits on and off the field made headlines in an age when most baseball players were scarcely known beyond the boxscore. One can only shudder at the presence Babe Ruth would have in American culture if he had played in today’s Internet age. But as new research has uncovered, George Herman Ruth was as much a hero in death as he had been in life. Yet that final stage of his legend went completely unreported.

During his baseball days the Sultan of Swat was everywhere. He was promising to hit one of 714 career home runs for sick little boys in the hospital. He was pointing out to centerfield and predicting home runs against the Chicago Cubs in the World Series. He was palling around with Herbert Hoover and joking to the press that the reason he made more money than the President was that he had a better year. And when he was sidelined for half of the 1925 season with syphilis it was reported to an adoring public that the great Yankee outfielder had messed up his stomach by eating too many hot dogs, gosh darn it.

Ruth receded from the front pages quickly after his playing days ended in 1935, however. The country was mired in a decade-long Depression and then there was World War II to worry about. A handsome – but taciturn – new Yankee outfield idol seemed right out of central casting for those new times, Joe DiMaggio. But the war ended and Hollywood produced The Babe Ruth Story

with a decidedly non-athletic William Bendix in the lead. The movie made it easy to forget that when Babe Ruth first started playing baseball he was a sculpted 190 pounds on a 6’2″ frame, as impressive a body as ever strolled to the plate in the dead ball era of the game.

When the movie came out Ruth was once again in the limelight – and the public gasped at what it saw. In the summer of 1948 Ruth, still in his early 50s, made an appearance at Yankee Stadium, the House That Ruth Built. The Bambino was a skeleton of his once robust self, frail and vulnerable. Two months later he would be dead. What had happened?

Ruth, the world learned, had been suffering from throat cancer. His elephantine appetites – for food, for alcohol, for women, for fast cars – were well known by that time so a diagnosis of throat cancer was an easy one for the public to swallow. A life like that, lived large in every way, was sure to come to such an end. There was no had-wringing over an autopsy or poking into the pathology of the case. Ruth just seemed to deteriorate so fast. He was buried in a quiet ceremony before about 100 people at the Gate of Heaven Cemetery in Hawthorne, New York.

A half-century later William Maloney, a dentist by trade and a Yankees fan by passion, visited the Babe Ruth Museum in Baltimore. Driven by professional curiosity, Maloney became fascinated with the mouth malady that had felled the greatest of all Yankees. He dug through archival records for more than a year and discovered that Ruth’s throat cancer was a rare form of the disease called nasopharyngeal carcinoma. It was so seldom seen, in fact, that there was hardly no research on the cancer in 1948 and all treatment at that time was experimental.

Babe Ruth had been the first person to receive a chemotherapy drug called teropetrin developed by oncologist Richard Lewisohn. Most of the cancer researchers considered the trials too risky for human subjects. Undeterred, Ruth spent the last year of his life testing novel and dangerous treatments so the medical community could study the rare disease. Those tests helped advance the procedures for chemotherapy.

Ruth’s teammate and fellow slugger Lou Gehrig developed a rare disease as well, amyotrophic lateral sclerosis, that became named for him. Gehrig, who was the most private of men, was hailed as an unlucky and courageous victim. Ruth suffered the same fate, but his dying heroics made no headlines. His legacy was of a hard-living man who ate and drank and smoked his way into an early grave. Maybe that is how the end must be scripted for a hero who is larger than life – the fates can not slay him, only his own actions can usher him to the end.