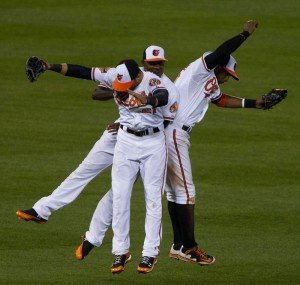 Baltimore Orioles outfielders by Keith Allison is licensed under CC by 2.0

Baltimore and Washington both clinched their divisions Tuesday. Baltimore clinching the AL east and Washington the NL east.  Baltimore has had an amazing season, even tough arguably their best players got hurt or suspended, but it still didn’t faze them.  Washington on the other hand was in a tough race with the Atlanta Braves up until about a month ago when they went on a 10 game winning streak.

First we will talk about Baltimore a team that has had to overcome injuries and a key suspension to become one of the top teams in baseball this season.  The next chapter began for the Orioles Tuesday night as Tommy Hunter got Ryan Goins to ground out to first. The stadium erupted in cheers and support for the team they have watched grow this season.  There wasn’t many people predicting the Orioles to make it this far, to win a division with the Red Sox (defending champs),  Yankees, and the Rays. They proved everyone wrong a long time ago, but it finally became official Tuesday.  Some may call their celebration overboard last night. I don’t I think that was a team that went through so much this season, and they finally can say we did it.  They have achieved the first step in a journey.  This is what sports are supposed to be about.  I’m sorry, but I don’t believe in holding back your emotions just because you beat another team that you are better than. Baltimore went through a lot and they deserved that celebration, and I believe this team will be doing more celebrating come October.

Baltimore has had some players come thru for them including Jimmy Paredes who has hit .419 since being traded from the Royals in July.  Steven Pearce who has filled in at first and played some outfield this season. Pearce is hitting an incredible .294 with 18 home runs and 44 RBIs which is amazing for a guy who never played more than 61 games in a season (this year he’s played 95 and counting).  Baltimore hasn’t been flashy, they don’t have many superstars outside of Adam Jones, still playing this season.  This is a team playing on chemistry like the San Antonio Spurs did to win the NBA title.  In my opinion chemistry is one of the most important traits in sports, this is an unselfish team.

This is a team that at the end of May was a .500 team and now they’re 31 games over .500. The Orioles are 39-18 since the All Star Break which is the best in the American League. Baltimore is also 42-23 against their division this season.  They haven’t lost two straight games at home since June 28 and 29 against the Rays.

The Orioles will be fun to watch in the playoffs and will definitely be a favorite of fans whose teams didn’t make the playoffs.  They  play the game the way it should be played.  Baltimore plays with a passion that not many teams play with, this team wants to win. They refuse to lose and I hope they can find away to win the World Series.  To be honest I’m tired of seeing what seems like the same team winning it ever year.  I wish the best to Baltimore and congratulations on winning the AL East.