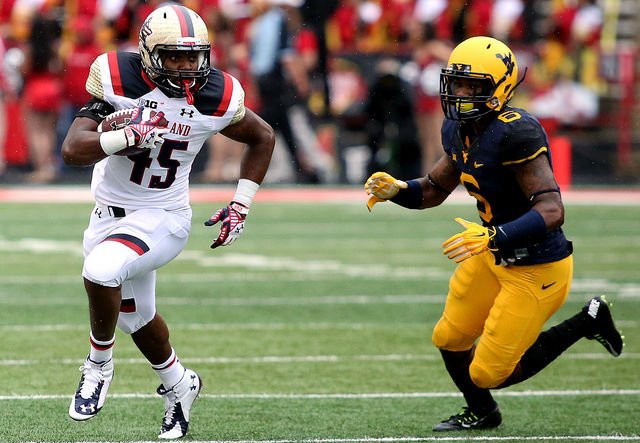 Last week I went against West Virginia and they went into Oklahoma Sate and destroyed them.  This week West Virginia has to play the best team in the Big 12 in TCU.  TCU comes into this game ranked seventh in the country and has absolutely been killing it on offense lately.  TCU comes in to the game averaging 50.4 points per game, which is first in the country and are coming off a win in which they put up 82 points against Texas Tech.  West Virginia also has a top offense averaging 36.9 points per game and only once this season have they scored 50 points and that was against Towson.  I expect this to be a very high scoring game, but TCU defense will win it for them, stopping West Virginia a few times.  If you take away the Baylor game, TCU defense has been really good this season. If you take the Baylor game away they would be only allowing only 15 points a game.  TCU a great team and could shake up the playoffs this season, but they will have to get past West Virginia on the road.  I got TCU pulling away late and winning by two touchdowns.

Charlie Strong has a lot of work to do at Texas, but this week he should get a win.  Texas will have to travel over 350 miles northwest to take on Texas Tech.  Texas got shutout by Kansas State last week and Texas Tech got blown out by TCU, allowing 82 points.  Texas has to win three games to go to a bowl game this season, which will be tough with games against West Virginia, Oklahoma State, and TCU. Both teams come into the game 3-5 and are two losses away from being eliminated from bowl contention. Both teams made a bowl game last season.  Texas Tech is also in a tough spot with games against Baylor and Oklahoma still on the schedule.  Texas has struggled in every offensive category this season and their defense has been very inconsistent.  Texas Tech defense has allowed over 21 points in every game this season.  I expect to see a different Texas team and the Longhorns to win by 10.

The last big game this week in the Big 12 is Oklahoma State at #9 Kansas State.  Kansas State is a few field goals away from being undefeated.  Starting this week the schedule for Kansas State get very tough, with games against TCU, West Virginia, and Baylor.  If Kansas State runs the table the deserve some serious consideration for a playoff spot.  Oklahoma State is coming off two straight losses to TCU and West Virginia.  Oklahoma State scored a total of 19 points combined in those two games.  The Cowboys have a very difficult schedule ahead of them and probably the most difficult in the conference.  They have games against Kansas State, Texas, Baylor, and Oklahoma.  Oklahoma State need one more win to be bowl eligible and in my opinion had one of the toughest schedules in all of college football this season.  Kansas State has the 20th ranked defense in the country and have not allowed more than 30 points this season.  The Wildcats are averaging 36.9 points per game, which is ranked 24th in the country.  Oklahoma State struggles defensively and I think that Kansas State will have no problem and win by 10.