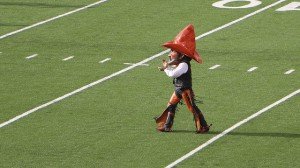 Pistol Pete at Boone Picken’s Stadium by OakleyOriginals is licensed under CC by 2.0

I didn’t pick Kansas State to upset Oklahoma or West Virginia to upset Baylor last week.  I thought about picking both of those games, and I actually changed both game before I published the article.  I had been saying all year that West Virginia would get an upset sometime this season and they finally got it.  Both games were very exciting and it’s always fun to see an upset.

There isn’t many games this week in the Big 12, but there is still a very good game this week.  Oklahoma State hosts #22 West Virginia, this is a huge game as it could decide the winner of the Big 12.  Both teams are tied for second place behind Kansas State and neither team has played the Wildcats yet.  West Virginia comes into the game with a very good offense that is currently ranked 25th in the country.  The Mountaineers only two loses are against Alabama and Oklahoma.  Oklahoma State is coming off an embarrassing 42-9 lose to TCU.  The Cowboys only other lose was against Florida State in the season opener.

Texas is 3-4 and is looking to avoid their worse start to a season since 1997.   Texas has appeared in a bowl game in every year except one since 1997, with 2010 being the only season that they didn’t make a bowl game.  The Longhorns will have a tough time this weekend going up against a very good Kansas State team.