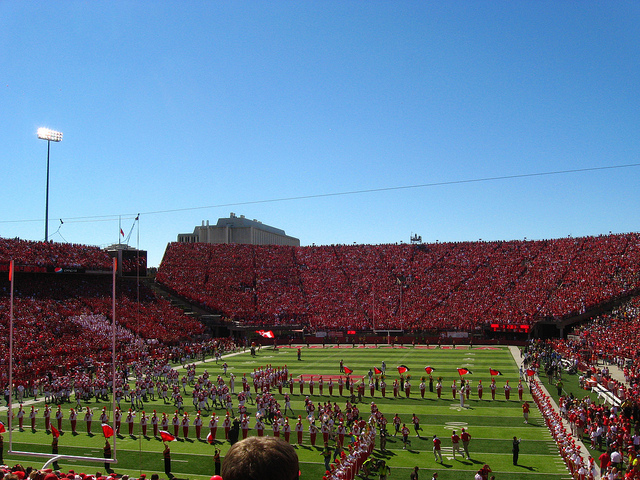 sea of red by Jared Hansen is licensed under CC by 2.0

I had a perfect week in the Big Ten last week, going 5-0.  This week there isn’t many big games, but if I had to choose one, it would be #13 Ohio State at Penn State.  Ohio State has been on a role since their lose to Virginia Tech earlier this season.  The Buckeyes have scored 50 or more points in the last four games and are ranked in the top 34 in both passing and rushing.  They also rank fourth in points scored.  Ohio State has played three straight weeks against good teams and absolutely dominated them.  Penn State got off to a 4-0 start, but have lost two straight games to Northwestern and the at Michigan.  I look for Penn State to compete early, but Ohio State to control the rest of the game.

Maryland at Wisconsin is a very interesting matchup.  Maryland only two loses have come to very good teams, they lost to West Virginia by three and lost by four touchdowns to Ohio State.  Melvin Gordon is having a great season for Wisconsin, as a team the Badgers are fourth in the nation in rushing yards per game.  I look for this to be a very good matchup, but with Maryland winning on a late field goal.

Rutgers at Nebraska is another big game this week.  Neither team can afford a lose, if the Rutgers lose they will be out of contention for the east division.  If Nebraska loses they will be two games back of Minnesota in the west.  The Cornhuskers senior running back Ameer Abdullah is having a great season and he is third in the conference in rushing.  Nebraska ranks in 12th in offense and 18th in defense.