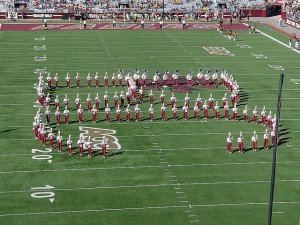 What’s it spell? by Lorianne DiSabato is licensed under CC by 2.0

On a week with so many upsets, few predicted this one.  Boston College came into this game inspired, by the Welles Crowther story.  Crowther was a hero and victim in the September 11th attacks.  The Boston College fans wore red bandanas to honor him, and when they stormed the field after the Eagles victory you could see them all.  After Boston College won the game 37-31 head coach Steve Addazio awarded the game ball to Welles Crowther’s family. Addazio post game news conference was great too, he came in their clapping his hands and gave a tribute to Crowther.

Boston College was leading 27-17 and had the ball with 12:22 left in the four quarter.  Tyler Murphy ran two times for a combined 52 yards and set them up inside USC five yard line. The Eagles had to settle for the field goal to give them the 30-17 lead.  USC got the ball back and drove right down the field on 10 plays to score a touchdown on a 10 yard Cody Kessler pass to Nelson Agholor. That made the game 30-24, then Murphy amazing 66 yard run touchdown made the game 37-24. USC went on to score one more touchdown, but it was too late.

The player of the game is definitely Tyler Murphy.  Murphy, a transfer from Florida, didn’t have a good game passing, but he ran the ball 13 times for 191 yards.  Murphy also had a rushing touchdown.

The biggest play of the game came with 3:30 left in the game when Murphy took off for a 66 yard touchdown run.  That run pretty much wrapped up the game for the Eagles.  Freshman running back Jon Hilliman had 89 yards on 19 carries, and two touchdowns.  Sophomore running back Myles Willis also had 89 yards rushing, but only nine carries.  The Boston College rushing attack had 452 yards on 54 carries and five touchdowns.  The Boston College win was their first against a top 10 opponent while being unranked since 2002 when they beat Notre Dame 14-7.

USC got off to a quick start with a 17-6 lead early in the second quarter, but went on to allow 24 unanswered points.  Cody Kessler had 31 completions for 317 yards passing and four touchdowns. Junior running back Javorius Allen had 118 yards receiving on nine receptions and a touchdown.  This was USC first lose ever to Boston College.  This lose won’t affect USC Pac-12 championship dreams, but their playoff dreams look over.

USC has a bye week next week and will host Oregon State on September 27.