Browns come back to beat Titans - Fueled by Sports 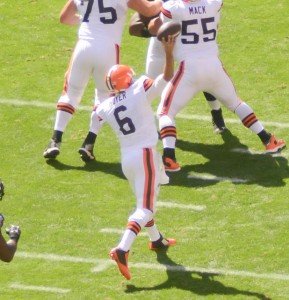 Cleveland Browns by Erik Drost is licensed under CC by 2.0

The Browns are just a few plays away from being 4-0 and they could easily be 0-4.  Cleveland has had every game so far come down to the final two minutes.  The Browns beat the Titans 29-28 after trailing 28-10 at the half.  It was the Browns (2-2) first win on the road since September 22, 2013 at Minnesota. Cleveland was down 28-3 before the half, but they where able to score with just :12 second left in the second quarter.  The Browns started out 3-2 and went on to win just one more game going 4-12.  It was the largest blown lead in Tennessee Titans history.

Brian Hoyer gave the Browns the lead with 1:09 left in the game when he threw a 6-yard touchdown pass to Travis Benjamin.  Hoyer finished throwing for 292 yards on 21 completions and three touchdowns.  Hoyer did throw his first interception of the season, and it was the first turnover by the Browns. After only running for 41 yards last week, Ben Tate ran for 123 yards on 22 carries against the Titans.  Benjamin had four catches for 48 yards, two of his catches where touchdowns.

The Titans (1-4) lose their fourth straight, after they demolished Kansas City to start the season.   Jake Locker went 8/11 passing with 79 yards and a touchdown pass and a he also ran for a touchdown.  Locker went out with a wrist injury in the second quarter and did not return.  Charlie Whitehurst took his place and completed 13 of this 21 attempts for 194 yards and two touchdowns.  Receiver Kendall Wright led the team in rushing with 43 yards on two attempts.  It’s never a good thing when a receiver leads your team in rushing and the Titans need to start running the ball more if they want to win.  Wright had two touchdown catches on six receptions and 47 yards.  Justin Hunter had a big game for Tennessee catching a 75 yard touchdown pass from Whitehurst in the second quarter.  Michael Griffin had 14 tackles and a sack for the Titans defense.

Next week the Browns host the 3-2 Pittsburgh Steelers.

Next week the Titans host the 0-5 Jacksonville Jaguars.  This game could potentially decide the number one pick.