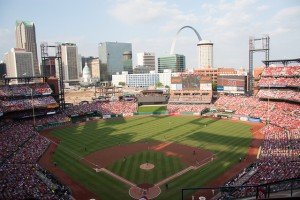 Busch Stadium by Andy Rusch is licensed under CC by 2.0

Madison Bumgarner was incredible in the Giants 3-0 win over the Cardinals, he pitched 7 2/3 innings giving up four hits and no runs.  The Giants took the home field advantage from the Cardinals.  St. Louis could never get anything going offensively, only mustering four hits, two of those hits came off Jon Jay bat.  San Francisco has been a very good team on the road, during the postseason winning their seventh straight.

The Giants jumped on Adam Wainwright early, scoring two in the second and one in the third.  Wainwright went 4 2/3 innings before Cardinal manager Mike Matheny pulled him from the game.  Wainwright only went 4 1/3 innings against the Dodgers in Game 1 of the NLDS.  The Cardinal bullpen was solid only giving up two hits in the final 4 1/3 innings of the game.

Travis Ishikawa drove in San Francisco first run, with the bases loaded Ishikawa hit a blooper down the left field line, over the head of Matt Carpenter to drive Pablo Sandoval in.  With two outs, Gregor Blanco than hit a hard grounder to third, that Carpenter muffed to allow the Giants second run to score.  Sandoval had a big game for San Francisco, going 3 for 4 with a double, he has historically been a great postseason player.

In the third inning Brandon Belt hit a sacrifice to drive Buster Posey in to give the Giants the 3-0 lead.

Santiago Casilla came in and closed the door in the ninth for the Giants, getting his third save of the postseason.

Matt Carpenter had one hit for the Cards, but his error was costly.  St. Louis needs to find their stride offensively if they want to recover in Game 2.

Kolten Wong misplayed a double play in the third inning, before Belt hit the sacrifice fly, and was able to only get one out.  If he doesn’t misplay than the Cards are out of the inning.

If the Cardinals would have executed in this game, it could have very well been scoreless and been an extra innings game.