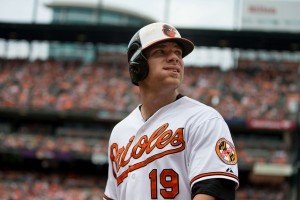 Chris Davis by Keith Allison is licensed under CC by 2.0

The Baltimore Orioles are currently wrapping up their first division title since 1997, but it will be without Chris Davis.  Davis the starting first baseman for the Orioles tested positive for amphetamines which violates the Major League Baseball drug program.  Davis said that the drug that he took was Adderall.  Davis had permission last year to use it, this year he didn’t. If Davis tests positive again he will get a 80 game suspension.  Davis has struggled this season with the league worth average at .196, one year after batting .286 and leading the league in home runs with 53.

Davis will be suspended for 25 games, which includes the playoffs.  This is huge blow for Baltimore, a team that is having one of their best season in almost two decades.  Baltimore will now be without their starting first baseman for at least eight games during the postseason.  If Davis does come back this season it won’t be until the American League Championship Series or the World Series. It will be tough for Baltimore to get that far without him, yea I know his bat hasn’t been what it was last year.  Baltimore has already lost its starting third baseman in Manny Machado and had to move Davis to third. Machado won’t be back till Spring Training.  Baltimore starting catcher Matt Wieters is also out for the rest of the season with tommy john surgery.

Now Baltimore will have to rely Ryan Flaherty, Kelly Johnson, Jimmy Paredes, and Jonathan Schoop to play third base.  These four players have played a total of 35 games at third this season.  Chris Davis has definitely let his team and the fans down. I know everyone makes mistakes, but Baltimore is having one of their best season ever.  It seams like everything keeps going wrong for Baltimore, but they keep winning.  You have to give a lot of credit to Buck Showalter, he’s turned this team into a World Series contender with average players this season.  I think that Showalter will figure out a way to get his team deep into the playoffs.