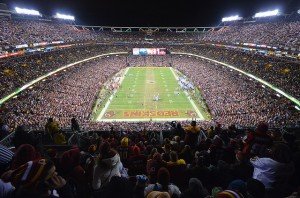 1st_playoff by Azeez Bakare is licensed under CC by 2.0

The Kurt Cousins era is now over in Washington. Kirk Cousins is now benched and Colt McCoy will start as the Redskins quarterback until RG III is cleared to resume play.

Coach Jay Gruden announced today that Colt McCoy is his new starting quarterback until Robert Griffin III is cleared to return from his ankle injury. Gruden said he doesn’t know when Griffin will be cleared, but if he’s not cleared for next Monday night’s game against Dallas, then McCoy will start.

This really doesn’t come as a big surprise as maybe it should be. Cousins has been lousy at the position quite often now, and McCoy provided the team with a spark when he came in after Cousins was benched on Sunday against the Titans. It only makes sense to keep McCoy on the job. McCoy’s very first play of him coming into the game was a strike to Pierre Garcon for a TD torching the Titans shaking secondary. He completed 11-of-12 passes for 128 yards and a touchdown in Sunday’s 19-17 win over the Titans. He did just enough to keep the Redskins in the game.

On another note though, it is a shocker.  As recently as a couple weeks ago there was talk that Cousins was the best fit for Gruden’s offense and might keep the job over Griffin. Instead, Cousins is now Washington’s third-string quarterback.

Washington is going nowhere this season, and the most important priority is to get Griffin healthy and see if he can flourish in Gruden’s offense. All Cousins has done is show that not only is he not a threat to unseat Griffin as the No. 1 quarterback, but he’s not even good enough to be a No. 2 quarterback. The Redskins now have got to find who their quarterback really is and find out which one can consistently produce positive numbers in Gruden’s offense.

This quite honestly couldn’t work and pan out any better for RG III. He now has another chance to regain his starting quarterback position.

The Redskins now have improved to 2-5 on the season and will travel to Jerry World this next Monday to play on prime time television against the number one ranked team in the NFL, the Dallas Cowboys. The Cowboys are 6-1 and look to improve to 7-1 and secure their home field win.