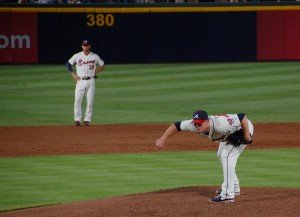 Craig Kimbrel by LWYang is licensed under CC by 2.0

Craig Kimbrel has added another award to his trophy case, with the Trevor Hoffman Award, which is awarded to the top closer.  Greg Holland won the AL equivalent, Marino Rivera Award. Kimbrel has been the NL saves champion since 2011 and has consistently been the top closer in baseball.   This is the third straight season that he has won a NL reliever award.  He was also the 2011 Rookie of the Year.

Kimbrel is from Huntsville, AL and he attended Wallace State Community College in Hanceville, AL.  Craig Kimbrel was drafted in the third round by the Braves in 2008 and he was first called up to the majors in 2010.

This season didn’t end like Kimbrel wanted it to, as the Braves had a monumental meltdown and missed the playoffs.

Kimbrel did have a great season though, posting a 1.83 ERA with 47 saves in 51 chances.  This is the first season of the Trevor Hoffman Award, and I expect this won’t be the last that Kimbrel wins.  He is the first player in baseball history to start with 40 or more saves in each of his first four seasons.

He has 185 saves over the past four season, which is 48 more than any other player.  Kimbrel also has 436 strikeouts during that span, which is 25 more than second place.

Kimbrel grew up a Braves fan and is currently under contract with the team until 2018 and I think he might take a pay cut to continue being their closer past that season.