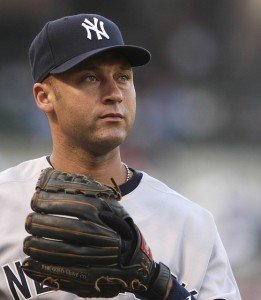 Derek Jeter by Keith Allison is licensed under CC by 2.0

It was a career that spanned 20 years, and featured 5 world series championships, 14 All Star Games, five gold gloves, five silver slugger awards, and a rookie of the year.  It was a storied 20 years for Yankee fans, most can’t believe it has come to an end.  It would have been great to see “Captain Clutch” play in one more postseason, but it didn’t work out unfortunately.  Derek Jeter is without a doubt one of the greatest players of this generation, if not of all time.  He ranks sixth all time in hits with 3,465, the only guys that have more hit than him are Pete Rose, Ty Cobb, Hank Aaron, Stan Musial, and Tris Speaker.  I would say that Jeter is in good company and it’s absolutely ridiculous if you don’t call Jeter one of the greatest players in history.  We might never see another player reach that milestone, the way the game has changed into a pitchers game and with players not playing as many seasons as they use too.  Jeter played fewer than 148 games only three times in his career.  The only seasons he missed less was in 2003, 2011, and 2013.  In 2003 he dislocated his shoulder on Opening Day but was still able to play in 119 games that season.  In 2001 he injured his calf, and played in 131 games.  The only season he ever missed was last season when he struggled with a variety of injures, and was able to only play in 17 games.

Jeter was drafted sixth overall in the 1992 draft by the Yankees.  The five picks before him went to a combined two All Star Games.  The Astros had the number 1 pick that season, and Hal Newhouser a scout for the Astros evaluated Jeter extensively.  Newhouser wanted the Astros to select him with the first pick, but Houston didn’t because they thought that Jeter would demand a huge bonus.  Newhouser quit when the Astros didn’t select Jeter.  The Astros went with Cal State Fullerton outfielder Phil Nevin, who went on to make just one All Star Game, he retired in 2006 with a .270 career batting average and 208 home runs.  The most notable first round picks in the 1992 draft where Jeter of course, Jason Kendall by the Pirates, and Johnny Damon by the Royals.  Like I stated earlier Jeter went to 14 All Star Games, the rest of the first round picks went to a combined 10.

Derek Jeter by Keith Allison is licensed under CC by 2.0

Derek Jeter had many great plays, but without a doubt highlighted by his play referred to as “The Flip.”  With the Yankees down 2-0 in the ALDS series against the A’s, Jeter sprinted to the first baseline to get a bad throw form Shane Spencer, Jeter then flips the ball backhanded to catcher Jorge Posada.  Posada tagged Jeremy Giambi out right before he could cross the plate.  The play preserved the Yankees 1-0 lead and they would go on to win the series.

Jeter was that kind of player, he did what ever it would take to win the game, even if that included diving in the stands to make a catch.  It will be hard to watch the Yankees play next season without Jeter being on the being on the field.  The Yankees will have to replace arguably their greatest shortstop in their storied history.

Derek Jeter has stated that he wants to buy a major league team, so we might be seeing Jeter sooner than you think.  Jeter hates to lose, so expect him to build a winner, but for now he will probably enjoy his retirement.