Despite an abysmal season off the court, the Knicks still have their eyes set on a playoff surge - Fueled by Sports 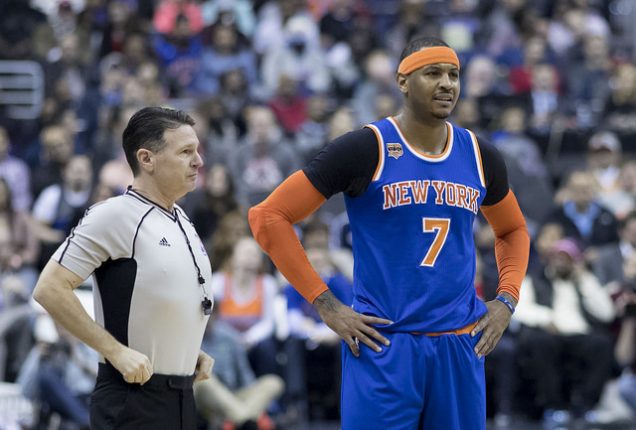 The image of Carmelo Anthony by Keith Allison is licensed under CC by 2.0

The New York Knicks have had a roller coaster season, which could be set for a big finish. Having started the season 14-10, they have since slipped to 23-33 coming up to the All-Star break, winning just 9 of their last 32 games.

If the on-court issues weren’t enough, the ones off are certainly worse. From Derrick Rose disappearing without informing anyone of his whereabouts, to Phil Jackson criticizing superstar Carmelo Anthony multiple times in the media, and most recently, owner James Dolan removing former Knicks Charles Oakley from Madison Square Garden last week during a loss to the Clippers.

Draymond Green said on his weekly podcast this week that he “cannot see why any free agent would want to go there.”

With no first round pick this season, and supposedly no big name free agents heading their way, the future is looking bleak in New York. Phil Jackson is continuing to push for a trade for Melo, despite his desire to remain in the orange and blue.

Derrick Rose is a free agent in the summer and Phil Jackson may settle for re-signing Rose to a max deal. Rose said last summer that he “Wants to spend the rest of his career here” and if he sticks to his word despite the drama, there could be some hope for Knicks fans going forward.

Perhaps their biggest win of the season came on Sunday in an early tip-off game against San Antonio, where the Knicks held on for a 94-90 victory, breaking a four game losing streak. The ongoing defensive issues disappeared in the second half of the game, and showed the league that if they play good D, then they can undoubtedly be a legitimate threat in the East.

They take on Russell Westbrook and the Thunder tonight which will be their final game before the All-Star break. If they can get a result on the road tonight, then the Knicks can potentially re-group and come back strong after the week off to push for the post-season.

It is evident that something needs to change in New York, and it is undoubtedly the front office. Phil Jackson needs to go, as he is consistently getting things wrong, and has put the Knicks in a position where they have no draft picks, and has pushed away his superstar to the point where other players in the league are refraining from considering New York as a free agency destination.

A playoff push may be on the horizon, but if they fail once again to make the post season, there could be many more dark days ahead for the New York Knicks faithful.