Dodgers tie up series with Cardinals - Fueled by Sports 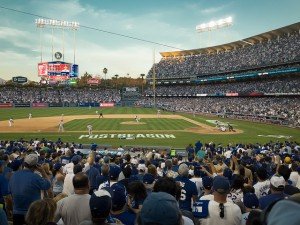 the moment before the wheels came off by Taylor Brigode is licensed under CC by 2.0

The Dodgers blew a big lead Friday night, but they wouldn’t let that happen again.  Zack Greinke pitched seven innings without giving up a run and only allowing two hits.  The Dodgers led 2-0 going into the eight when Matt Carpenter hit a two run home run off J.P. Howell to tie up the game.  Carpenter is having a terrific postseason so far, going 4-8 with 2 HRs and 6 RBIs.  Matt Kemp gave the Dodgers the lead with a solo home run in the bottom of the eighth off Pat Neshek.  It’s probably a good thing that Kemp hit that home run because I don’t know if I could take another extra inning game.

The Cardinals had only five hits in the game, with Carpenter being the only player with a multi hit game on St. Louis.  Lance Lynn pitched six innings giving up two runs on seven hits.  Cardinals top prospect Oscar Taveras got his first career postseason hit and scored on Carpenter home run.

Matt Kemp had another big game for the Dodgers going 2-4, with the go-ahead home run.  Kemp is 5-9 in the series and he will need to continue to hit the ball if Los Angeles wants to advance to the NLCS.  Pitcher Zack Greinke had a big game at the plate going 2-3 and he scored a run.  Brandon League shut the Cards down in the eight with Kenley Jansen closing down the ninth for the Dodgers, striking out two of the three batters he faced.