I had a pretty good day on DraftKings yesterday, racking up 143.65 points, I did make some mistakes though. The first one was the pitchers I picked. I had Jesse Chavez and Jon Lester in my pitching spots. Lester was off to a great start before the weather got crazy and the game ended up being postponed, which means his score goes to zero (something I hate, but I do understand the reasoning). Chavez was just awful and I guess all I can about that is you can’t win them all. Dee Gordon and Matt Kemp didn’t put up a goose egg, but they didn’t produce like I expected them too.

Here’s a screenshot to prove that I submit the lineup I post on here. 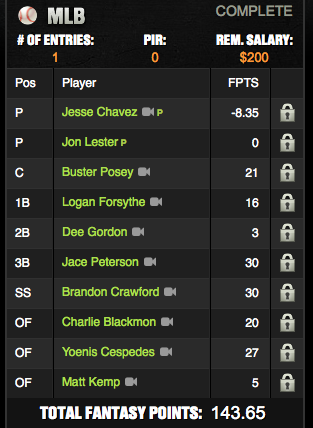 Now it’s time for today’s lineup.  We have a bunch of great pitchers on the mound today which always makes it a little bit more difficult to pick a winning lineup, but that doesn’t mean we won’t try.

Max Scherzer ($13,500) – Scherzer has been one of the most dominant pitchers in baseball this season.  He’s very expensive, but he should be worth the cost.  The last time he faced the Diamondbacks in Arizona, he went seven innings allowing five hits, one earned run and striking out six.  That equaled out to 26.2 points!  The D-backs bats were quiet on Saturday and Sunday and it looks like they’re starting to cool off, so just maybe Scherzer will have a big game.

Shelby Miller ($9,400) – Miller has been the most dominant pitcher this season that doesn’t have six wins.  Yes, a guy with a 2.44 ERA over 133 innings doesn’t have six wins.  That’s just how bad the Braves offense has been when their ace is on the mound.  Miller is coming off another rough start in Philadelphia, but there’s good news for him.  He’s returning home!  The righty has been great at home this season, posting an ERA of 1.90 in 57 innings, while striking out 59 batters, which is over a strikeout an inning.  He’s also averaging 21.5 points at home this season.

Salvador Perez ($3,000) – Perez has struggled since the break, but fortunately for him he’s facing Justin Verlander, who’s he absolutely owned in his career.  He’s hitting a sharp .429 in 35 at-bats against Verlander and you can also add a home run and 10 RBIs on top of that.  Perez is also due for a big game, so I think he’s your best bet at catcher today.

Edwin Encarnacion ($4,100) – Encarnacion plays at the Rogers Centre, that is all.  No just kidding, but yea the big slugger plays at one of the most hitter friendly parks in the game.  The first baseman/designated hitter is hitting a cool .368 with a home run and six RBIs in 38 at-bats against Phil Hughes.

Ben Zobrist ($4,300) – Zobrist has been on an absolute tear lately, but he was playing at the park I just mentioned above.  The switch-hitter has been great since coming over from Oakland last week, and has hit three homers in the past two days.  He also faces Verlander and he owns the righty, hitting .350 with a homer and two RBIs in 20 at-bats.

Ketel Marte ($2,000) – Marte is one of my two low ball picks of the day.  If you want to add some power arms you’ll have to take a risk at one or two positions.  Marte is that risk and it could be a high reward risk too.  The shortstop is just 21 and playing in his fifth major league game, but he brings speed to the table and like I said yesterday speed kills in fantasy baseball.  Marte has yet to steal a base and add that to the fact he’s playing at Coors Field, which has one of the biggest outfields in the game makes this a recipe for success.  I expect Marte to end up with a couple of extra base hits and maybe a stolen base.

Update: Marte is not in the Mariners lineup today.  I replaced him with Daniel Castro of the Braves.  Castro is going up against Jake Peavy tonight, who’s struggled on the road since coming back from the disabled list.

Josh Donaldson ($4,700) – Donaldson has been nothing short of spectacular lately and the third baseman loves playing at the Rogers Centre, as I would imagine most players do.  He hasn’t had great success against Phil Hughes in his career, but the third baseman is just on fire right now and there’s no reason not to take him until he has a bad game.  I mean he’s having an MVP type season, so you can’t go wrong with this option.

Adonis Garcia ($2,000) – I picked Garcia in one of my other games yesterday and thought it was a mistake until he launched a walk-off home run in the 12th inning against the Giants.  All was redeemed I won the head-to-head matchup and Garcia walked away with 23 points.  Garcia has been a pleasant surprise since being called up a few weeks ago and already has three home runs.  Add that to the momentum from yesterday makes this a good risk pick.

Yasiel Puig ($3,400) – Puig was off on Sunday and the Dodgers play in Philadelphia today against a struggling pitcher in Jerome Williams.  Puig has not been what Los Angeles thought he would be this season, but he’s still a very good player facing a pitcher that gives up a lot of home runs in a hitters ball park.  That right there smells like some serious points for Puig today.

Christian Yelich  ($3,400) – Yelich got off to a rough start this season, but has turned it around and is playing very well right now, especially at home.  The lefty is coming off a 3-for-4 night with two doubles against the Mets and gets to face Jon Niese tonight, who he’s had success against.  He’s hitting .417 with one RBI in 12 at-bats against the southpaw.

Some of these players may not be in the lineups when they are released, so please do your own research.  I’m also not responsible for any money you lose, as this is for information purposes only.