Florida at Alabama First Half recap - Fueled by Sports 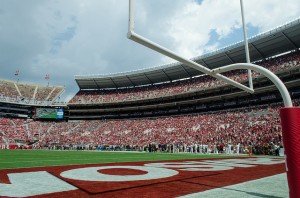 Florida at Alabama First Half recap

It was a sloppy first half in Tuscaloosa, we saw a combined 5 turnovers.  Alabama fumbled three times, one of them was returned for a touchdown by Florida’s Keanu Neal which at the time gave the Gators a 14-7 lead.  Jeff Driskel also threw an interception to go along with a fumble for the Gators offense.  Alabama leads 21-14.

Blake Sims had a huge first half completing 17 of his 23 passes for 335 yards passing and a three touchdowns.  Amari Cooper added seven receptions for 175 yards and a touchdown to his already great season.  The Alabama running game wasn’t in impact in the first half, but you have to think they will come out running in the second half.  Jabriel Washington got the first interception of the year for the Crimson Tide.  Two of Alabama three touchdowns were over 79 yards the other being 87 yards.

Jeff Driskel had a rough first half completing 5 of his 17 attempts for 53 yards a touchdown and a interception.  The only highlight of the first half for Driskel was his 28 yard TD pass to Valdez Showers.  Florida has ran the ball 17 times for 52 yards that includes rushes from Driskel, Matt Jones, and Kelvin Taylor. Florida offense has been non existent in the first half, if it wasn’t for their defense forcing those turnovers you would have to think this game would be a blowout.

Keys in the second half

If Alabama wants to hold on they will need to run the ball and not turn it over.

Florida can’t turn the ball over and will need to keep forcing turnovers.