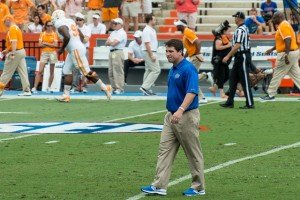 Florida vs Tennesee 2013 by photo-gator is licensed under CC by 2.0

Tennessee hasn’t beat Florida since 2004, and that wouldn’t change today.  For the tenth straight season the Vols feel just short losing 10-9, in a game that they controlled till the final quarter.

Florida defense saved them yet again, forcing Tennessee quarterback Justin Worely to throw two interceptions.  Both interceptions came on key drives.  The first one came right after Tennessee picked the ball off and where on Florida 13 yard line, and the other came with 51 seconds left in the game and with the Vols driving.

Jeff Driskel struggled again for Florida and Will Muschamp pulled him out of the game at the end of the third quarter.  Driskel finished with 59 yards passing, three interceptions, and no touchdowns.  It was the second straight game that Driskel didn’t pass for over 100 yards.  Treon Harris came into take his place, Harris threw for 17 yards on two completions.  Harris also ran for 24 yards, he will more than likely be the starter for the Gators moving forward.  Matt Jones had a big game with 114 yards rushing on 23 carries and a touchdown.  The player or players of the game for the Gators is their defense.  Moving forward Florida defense will have to carry this team if they want to have a chance to win the East.

Tennesse played a great game, but had three key turnovers two interceptions and a fumble.  Justin Worley completed 26 passes on 39 attempts for 206 yards, but he was unable to throw a touchdown pass. True Freshman Jalen Hurd had 39 yards rushing on 10 carries.  Pig Howard had 79 yards receiving on six receptions.  Aaron Medley was responsible for all of Tennessee points going 3/3 kicking, with his longest field goal being 39 yards.  Tennessee is a very young team and will continue to play tight games, but I think that Tennessee fans should start looking forward to next season because it should be a good one.

Tennessee plays at home vs Chattanooga next week.

Florida plays at home vs #15 LSU next week.