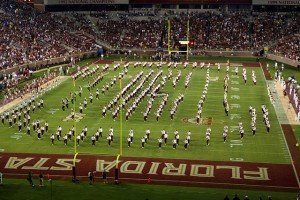 Pre-Game Show by Hector Alejandro is licensed under CC by 2.0

It’s fourth and goal, Florida State leads Notre Dame 31-27, the Irish have the ball on the two yard line.  The center snaps the ball to Everett Golson, who hits Corey Robinson for the touchdown, the team starts rushing the field.  But, wait there is a flag, pass interference on the offense, so now Notre Dame has a fourth and goal on the 17 yard line.  A lot of Notre Dame fans will complain that it wasn’t a pass interference, but the truth is that it was.  C.J. Prosise was suppose to run a pick, but he pushed the corner back into the end zone.  If you want to get away with it, you can’t make it that obvious.  It sucks because I don’t think that the better team won that game, the Seminoles were outplayed and in my opinion aren’t a playoff team.  Yea, you can call me crazy, but it is the truth.

Notre Dame led or was tied the whole game until 7:39 left in the fourth.  The Irish were up 17-10 at the half, the 10 points that the Irish held them to was tied for the lowest, since Jameis Winston became their starting quarterback.

Golson finished the game with 313 yards passing on 31 completions and three touchdowns.  He threw two interceptions in the game, one early on in the second quarter, but his defense picked Winston off on the next play.  His second pick was on their last offensive play of the game, the fourth and goal on the 17 yard line.  Golson was pressured and hit while he was throwing it, which resulted in a bad pass.  He was only 5 for 16 on passes of more than 10 yards.

Corey Robinson, the son of the great David Robinson, had eight receptions for 99 yards and two touchdowns.  Robinson was the main target all night for Golson.  Tarean Folston, had a big game rushing for the Irish, with 21 carries for 120 yards.

Notre Dame finished with 470 yards of total offense and controlled the line of scrimmage for pretty much the whole game.  The Irish dominated on third downs going 7 for 18 and holding Florida State to only two conversions of eight attempts.  The Irish were 2 for 5 on fourth down, which includes that great fourth down conversion on 4th and 18, with less than a minute left.  The Irish went for it on a fourth and one, early on in the second quarter and failed to convert.  Florida State went on to kick a field goal to make it a 14-10 game in favor of Notre Dame.  If they punt it on that drive, there is a good chance that the Seminoles don’t score and the Irish are only down by one on the final drive.  All they would have needed was a field goal to win the game.

Jameis Winston led his team to a great comeback.  He threw for 273 yards on 23 completions and two touchdowns.  Winston did throw an interception that led to a Notre Dame touchdown.  Senior running back Karlos Williams had only 25 yards rushing, but had two touchdowns.  Senior receiver Rashad Greene led his team today, they said he got up at halftime and fired his team up, which is unlike him.  Greene finished with 108 yards receiving on eight catches and a touchdown.  Jacob Pugh had both interceptions for the Florida State defense.

This has been one of the greatest college football seasons that I’ve ever seen.  This was a great game and no matter where these teams end up at the end of the season, it will go down as one of the best games of the season.

Florida State will have to travel to play at Louisville next week.  I think this is a huge trap game for Florida State.  The two toughest games of their season so far have been at home.  Both of Louisville losses have come on the road, it will make an interesting story.  I do think that the Seminoles are on upset alert the next two weeks against Louisville and Virginia.  Virginia has a great defense, but they lack the offensive prowess to beat Florida State.

Notre Dame has a bye week next week, and will travel to play Navy in two weeks.  Notre Dame doesn’t have it easy to finish out their season with games at Arizona State, and USC.  They have home games against Northwestern and Louisville, so it will be no easy task for Notre Dame to win out.