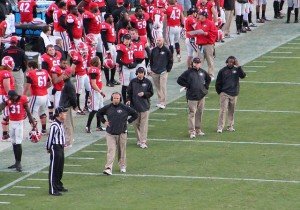 No Todd Gurley? No problem.

Georgia went to Missouri without its Heisman Trophy candidate, but a stout defensive effort and a 143-yard rushing performance from freshman Nick Chubb lifted the 13th-ranked Bulldogs to a dominating 34-0 victory over the 23rd  ranked Tigers in an SEC East showdown on Saturday at Faurot Field.

As everyone almost knows by know Todd Gurley was suspended by the school earlier this week while an investigation into possible extra benefits is conducted. The running back reportedly was paid for signing items and memorabilia.

Chubb ran the ball 38 times with a touchdown to lead a Georgia ground attack that racked up 210 yards. Brendan Douglas also rushed for a score, as did quarterback Hutson Mason who threw for 156 yards with a touchdown on an efficient 22-of-28 passing for the Bulldogs who have won four in a row since a 38-35 loss at South Carolina and are now 5-1 while 3-1 in the SEC.

Missouri is coming off a bye after a 21-20 win at South Carolina. They managed just 147 total yards and only 10 first downs. The Tigers had a stark differential in time of possession, holding the ball for just over 17 and a half minutes, while Georgia controlled it for nearly 42 and a half minutes. Maty Mauk struggled all afternoon for Missouri.

The Tigers couldn’t manage much offense on their final three possessions of the second quarter. The second of the three ended when Georgia’s Leonard Floyd knocked the ball out of Mauk’s hand for a fumble at midfield. The Bulldogs though, were unable to move the ball and punted it back to Missouri in the final minute of the half. Mauk was intercepted in Georgia territory on each of Missouri’s first two possessions in the second half. The second pick led to a 15-yard touchdown run by Douglas, capping a nine play series exclusively on the ground. Chubb finally reached the end zone on Georgia’s next series with a 9 yard run midway through the fourth to account for the final margin.

Georgia now controls their own destiny. The Bulldogs play Arkansas next week in Arkansas who is on a 15 SEC game losing streak. For the Tigers, Missouri plays in the swamp next week against the Florida Gators for another SEC East showdown.