Giants beat Cardinals! One win away from World Series - Fueled by Sports 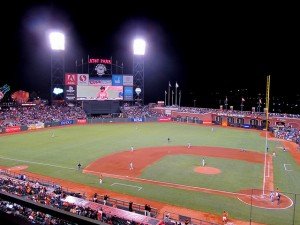 The San Francisco Giants are just one win away from the World Series, after beating the St. Louis Cardinals 6-4.  The Giants are seeking their third pennant in just five years.

Buster Posey drove in three of the Giants six runs.  Posey was 2-13 coming into game, but proved why he’s one of the best in the game going 2-3, with a sacrifice fly.

Matt Adams got the Cardinals started off in the first inning, driving in Matt Carpenter to give St. Louis a 1-0 lead.  The Giants scored a run of their own in the bottom of the inning on a sac fly by Posey, driving in Gregor Blanco.  Blanco had a double to lead off the innings on a deep fly ball that hit off of Jon Jay’s glove.

The Cardinals scored again in the second, when Kolten Wong hit a double and then A.J. Pierzynski drove him in.  Wong had a big game for St. Louis and continued his great series.  He hit a two run home run in the third, which gave the Cards a 4-1 lead.  San Francisco scored two runs in the bottom half of the third to make it a 4-3 game.

St. Louis would hold the lead till the sixth inning, when San Francisco scored three runs to give them the 6-4 lead.  The Giants had runners on second and third with one out and Blanco coming to bat.  Blanco hit a ground ball to first baseman Matt Adams, who instead of taking the sure out at first, forced a throw home which bounced in the dirt and allowed the run to score in Blanco safe at first.  Joe Panik then came up and hit another ground ball to Adams, who again makes a huge mistake again.  This ground ball was hit straight to him and he tagged first, allowing the run to score, and then he makes a bad throw to second.  Posey would drive in the final San Francisco on a single to left, allowing Blanco to score.  Adams made a huge mistake, he should’ve never tried to go home, all that run did was tie up the game and St. Louis would have two outs.  His next big mistake is not going home with the throw on the next hit to first.

Shelby Miller struggled for the Cardinals, only going 3 2/3 innings and giving up three runs on six hits.  St. Louis pitcher Marco Gonzales also gave up three runs, but he gave those runs up in just  2/3 of an inning.

Game 5 is Thursday at 8:07 pm ET.  Madison Bumgarner (18-10) will pitch for the Giants and Adam Wainwright (20-9) will pitch for the Cardinals.  St. Louis will look to avoid elimination, they had a tough time against Bumgarner in Game 1.  Wainwright wasn’t on the top of his game, but I think with the series on the line he will pitch the game of his life.  Bumgarner has pitched one home game this postseason and lost to the Nationals.  He’s known for being a road pitcher during the postseason and I look for that to continue.  I think the Cardinals will win this game and take this series back to St. Louis.