Giants shut out Pirates Advance to NLDS - Fueled by Sports 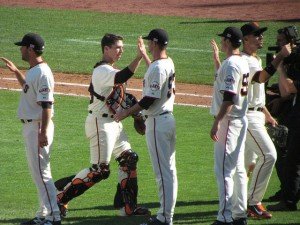 The San Francisco Giants shut out the Pittsburgh Pirates 8-0 to advance to the NLDS to take on the Washington Nationals on Friday at 3:07 p.m. ET.  Madison Bumgarner pitched a complete game, struck out ten, and walked one.  The Giants have won the World Series the last two times they made the playoffs (2010 and 2012), and I think they can do it again.

Edinson Volquez went five innings for the Pirates giving up five runs.  The Pirates never had an answer for Bumgarner, leaving six runners on base and going 0-4 with runners in scoring position.  Bumgarner threw 79 of this 109 pitches for strikes, which just shows you the Pittsburgh youth and how they where impatient at the plate.  He made the Pirates who had one of the best offenses this season, look silly.  Pittsburgh was one of the hottest teams in baseball in the month of September going 17-9. Starting ace Gerrit Cole in the final game of the season looked to have cost the Pirates this game, but we will never know.  They where still in contention for the division title, but I think they should have started Volquez in that game.  Pittsburgh does have a bright future and they will need to work on closing out the division next season.

The Giants got off to a quick start with a Grand Slam for Brandon Crawford in the fourth inning.  Brandon Belt also had a big game for the Giants going 2-3 and driving in three runs. In the end it was a team effort though as they where able to get 11 hits, and have six different players score a run.

San Francisco will start Jake Peavy in game one against the Nationals. The Nationals have yet to announce who they will start in the Friday game.