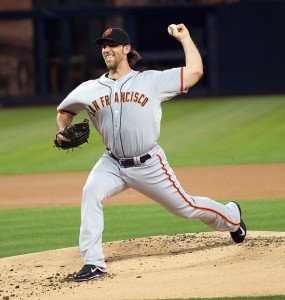 SF Giants Madison Bumgarner by SD Dirk is licensed under CC by 2.0

Kansas City was no match for the Giants and Madison Bumgarner in Game 1 of the World Series.  San Francisco beat the Royals 7-1, and the Giants dominated the whole entire game, starting with the leadoff batter.

Gregor Blanco led off the game with a blooper that landed right in front of Royals center fielder Lorenzo Cain.  You know if Cain can’t catch it than no one can.  Blanco tagged up advancing to second on a Joe Panik deep fly to left center.  Buster Posey came up and moved Blanco over to third, and that’s when it gets interesting.  Blanco scored on a Pablo Sandoval double, but Posey was thrown out at home.  Hunter Pence then hit a two run homer to give the Giants an early three to nothing lead.

That pretty much knocked the Royals out of the game from the start, with Bumgarner pitching.  Bumgarner has been brilliant on the road lately and that continued tonight.  He did lose his scoreless streaks, after Salvador Perez hit a solo homer in the seventh.  That ended Bumgarner’s major-league record of scoreless postseason innings on the road at 32 1/3 innings.  He also had a streak of 21 straight innings without giving up a run.  Bumgarner is the most dominate pitcher in this series and fortunately for the Royals, he may only pitch one more time.

Bumgarner went seven innings, only giving up three hits and that solo homer.  Javier Lopez pitched the eighth for the Giants and only allowed one hit.  Hunter Strickland, who had been struggling this postseason, pitched a solid ninth striking out two and not allowing a hit.

The Royals played their worst game of the postseason so far.  I’ve been telling people that James Shields is not a very good playoff pitcher, I know they call him Big Game Shields.  But, I haven’t been impressed with his performance this postseason or the past.  He went three innings, giving up five runs on seven hits.  Danny Duffy pitched three innings for the Royals, allowing two runs on one hit in three innings of work.

Kansas City had a major opportunity in the third innings, with runners on second and third and no outs.  Bumgarner went on to strikeout two batters in a row and Eric Hosmer to ground out to second base.

I think that the Royals still have the advantage in this series, but everybody knew that Bumgarner would bring his A-game.  Kansas City should fare a lot better against the Giants next three starters, but San Francisco is hot right now and has the momentum.

Game 2 is Wednesday at 8:00 pm ET on Fox.  Jake Peavy will pitch for the Giants and Yordano Ventura will go for the Royals.