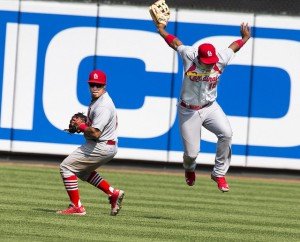 Kolten Wong, Oscar Taveras by Keith Allison is licensed under CC by 2.0

St. Louis has the home field advantage and that will play a huge role in this series.  The Cardinals won all three of their home games in last year NLCS.  There is no doubt that the Cardinals play better at home, they finished the regular season with a 51-30 record at home, which was tied for first in the National League.

Both teams are coming off upsets and are known to be playoffs which could make this series very interesting.

The Giants won the season series four games to three.  There was four shut outs in those match ups, with each team having two.  They last played on July 3, when the Cardinals beat the Giants 7-2 in San Francisco.

Here’s my breakdown of each team.

The Giants Game 1 starter will be ace Madison Bumgarner, he was 18-10 with a 2.98 ERA this season.  He is 1-1 in this postseason with a 2.57 ERA in two starts.  In his Game 3 lose against the Nationals, it wasn’t his pitching that was the problem, the Giants only scored one run and Bumgarner had a key throwing error that allowed two runners to score.  In Bumgarner last start against the Cardinals, he gave five runs (four earned), six hits, walked three in just five innings.  In his first start against St. Louis this season, he pitched seven scoreless innings.  Jake Peavy will more than likely be the Game 2 starter, he had a great second half of the season with the Giants after being traded by the Red Sox.  Peavy went 7-4 with a 2.03 ERA with the Giants and went 1-9 with a 4.72 ERA with the Red Sox.  Peavy pitched against the Cardinals in last season’s World Series, St. Louis won the game and Peavy got a no decision after giving up two runs in four innings.  Tim Hudson will go in Game 3 for San Francisco, he struggled in September, but turned it around in Game 2 against the Nationals giving up one run in 7 1/3 innings. Hudson shut St. Louis out in his only start against them this season.  Ryan Vogelsong will pitch in  Game 4, he has struggled against the Cardinals lately, but did beat them twice in the 2012 NLCS.

Adam Wainwright (20-9) will go Game 1 for the Cardinals, he had a superb September going 5-0 with a 1.38 ERA, but struggled in Game 1 against the Dodgers giving up six runs in only 4 1/3 innings.  St. Louis manager Mike Matheny said earlier this week that Wainwright is dealing with a tired arm, but insisted that he will be ready to go.  Historically Wainwright has been a very good postseason pitcher and I look for that to continue.  Lance Lynn will go in Game 2 for St. Louis, he went 15-10 with a 2.74 ERA this season.  Lynn gave up seven runs (four earned) in just 3 1/3 innings in his last start against the Giants.  He has never beat the Giants, he is 0-4 and has never held them to under four runs.  John Lackey will go Game 3, he was 14-10 with a 3.82 ERA.  Lackey has been a very good postseason pitcher, he went seven innings only giving up one run in the Cardinals Game 3 win over the Dodgers.  Shelby Miller will pitch Game 4, he was 10-9 with a 3.74 ERA this season.  Miller pitched the NLDS clinching Game 4, pitching 5 2/3 innings giving up two runs in the Cardinals win.

San Francisco didn’t have much of an offense in the NLDS. They were able to only score a total of nine runs in the whole series.  The will have to find some offense if they expect to get past the Cardinals.  Just to put the two teams in comparison, St. Louis had nine runs by the seventh of Game 1.  The Giants will have to play like they did in their blowout victory over the Pirates in the Wild Card Game.  The Giants do have the 2012 MVP Buster Posey, who hit .354 with 12 home runs since the All-Star break, he finished the season with a .311 batting average and 22 homers.  Posey has struggled in past postseasons, but is hitting .395 so far in this postseason.  I expect Posey to have a big series, but he will need help from others to supply the San Francisco pitchers with run support.  Pablo Sandoval has historically been a very good postseason hitter, but he struggled in the NLDS going 4 for 19.   Hunter Pence also struggled going 5 for 18, but he has never been a great postseason hitter and currently has a .223 career postseason average.  Sandoval and Pence bat fourth and fifth and will be a key for the Giants in this series.  They need to find their bats now or the Giants can kiss this series goodbye.  San Francisco hit just one home run in the NLDS and it came off the bat of Brandon Belt in the 18th inning of Game 2.  Mike Morse (oblique) is also expected to return for the Giants and could make an impact.  The Giants have missed outfielder Angel Pagan, who underwent season-ending back surgery last month, his replacement Gregor Blanco struggled in the NLDS going 2 for 18.

Matt Carpenter enters this series as the hottest hitter in baseball.  Carpenter batted .375 with three home runs in the NLDS.  Carpenter hasn’t had the best of luck during past postseason, but it looks like his luck might be changing.  All six of his hits in the series were extra base hits, with three doubles to go with this three homers.  St. Louis finished second to last in home runs this season with 105 homers (second only to the Royals 95), but they found their power in the NLDS hitting seven big flies.  Jon Jay led the Cardinals in hitting during the regular season, with a batting average of .303 and that didn’t change in NLDS.  Jay went 5 for 11 and reached base eight times and look for him to continue his success.  The Cardinals did struggle early on only scoring three runs in the first five innings during the NLDS.  They scored 15 times after the sixth inning.  St. Louis did have two big bats struggle in the first round, shortstop Jhonny Peralta, who led the team in homers with 21, and All-Star catcher Yadier Molina.  The two were held to just three hits apiece and went a combined 6 for 29 and neither one homered.  The Cards did have a few pleasant surprises from rookies Kolten Wong and Randal Grichuk, each hit a home run, but ended up struggling the rest of the series going a combined 3 for 25. I look for the Cardinals to continue their offensive outburst and score a lot of runs.

Bruce Bochy know how to handle a bullpen and that has been proven over and over again.  The Giants finished third in the National League this season with a 3.01 ERA.  Santiago Casilla took over as closer for Sergio Romo earlier this season and has been unreal since.  Casilla had 19 saves with a 1.74 ERA in 58 1/3 and he has just one blown save. Casilla throws hard with a fastball in the 94-95 range and he will also rely on a nays curveball and sinker.  Romo has taken over as the setup guy and has done a pretty decent job, posting a 3.72 ERA in 58 innings pitched.   Romo has a nasty slider to go with a 88-90 mph 2 seam fastball and a good change up.  Also watch for the two San Francisco lefties in Jeremy Affeldt and Javier Lopez, both have a lot of postseason experience.  Affeldt has a 1.78 ERA in his postseason career and was on the 2010 and 2012 Giants that won the World Series.  Lopez has a career 3.77 ERA in the postseason and has won three World Series, two with the Giants, and with the Red Sox in 2007.  Yusmerio Petit, the Giants extended reliever, set a major league record retiring 46 consecutive batters.  He continued his great season by working six scoreless innings out of the pen in the 18-inning game against the Nationals.   The Giants also have Tim Lincecum was moved to the bullpen for the playoffs, but hasn’t pitched yet.  Lincecum pitched a no-hitter earlier this season and could be a key in this series.

The Cardinals have a great closer in the hard throwing right hander Trevor Rosenthal.  Rosenthal saved 45 games this season, with a 3.20 ERA and striking out 91 in 73 1/3.  Rosenthal does has 43 walks and that’s one thing he must fix in order to become one of the best closers in the game.  The St. Louis bullpen finished 17th in the majors with a 3.62 ERA.  St. Louis also features one of the best setup men in baseball in All-Star Pat Neshek, he posted a 1.87 ERA in 67 1/3 innings this season.  Neshek did give up a game deciding home run to Matt Kemp in Game 2, but he has since recovered retiring six straight.  The Cardinals will also feature starter Michael Wacha in the bullpen, he has suffered from a shoulder injury and I don’t expect to see him play much.  Rookie left handers Marco Gonzales, veterans Randy Choate and Sam Freeman will be the Cardinals lefties, all three are very capable.

The Giants have struggled this season with injures and don’t look for them to use their bench that often, as it features three rookies and none made an impact in the NLDS.  Lefty Travis Ishikawa will be on the bench with Mike Morse returning and will probably be the go to pinch-hitter. Ishikawa hit .274 in 97 at-bats this season, but he struggled in the NLDS going 2 for 11.

The Cardinals have rookie Oscar Taveras, who is the future in their outfield.  Taveras had the only hit off the bench for either team in the NLDS.  Daniel Descalso, who has postseason experience, will also be a key coming off the bench.  St. Louis will have speedster Peter Bourjos, who can come in and steal a base for them, and Pete Kozma, both players are excellent defenders and don’t be surprised to see them late in a game.

Bruce Bochy is known as a postseason manager and has won the World Series the last two times the Giants made the playoffs.  There is no manager better than Bochy when it comes to situational baseball.