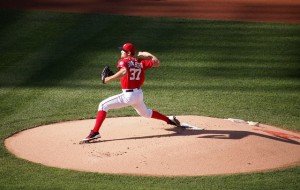 The last two times the Giants made the playoffs (2010, 2012) they won the World Series.  San Francisco went down 2-0 against the Reds in their last NLDS two years ago, and where able to win three straight.  It will be tough for them to do that against the Nationals, so they will have to avoid going down two games.  The Giants blew out the Pirates on Wednesday 8-0 in the Wild Card Game. That win advanced them to the NLDS and now they will have to face the best team in the National League, the Washington Nationals (96-66).  Washington had their way with the Giants this season winning five of the seven meetings.  Game 1 is Friday at 3:07 p.m. ET on FS1.  Jake Peavy (7-13) will go for the Giants, with Washington ace Steven Strasburg (14-11) going for the Nats.

The Giants starters have struggled since All Star break with a 3.67 ERA, which is the fifth worse in the NL.  Madison Bumgarner (18-10) separated himself from the rest of the pitching staff this season, he truly looked like an ace.  Bumgarner posted a 2.98 ERA this season, and he pitched a complete game shut out against the Pirates on Wednesday.  Jake Peavy will go game 1 for San Francisco.  Peavy was traded to the Giants from the Red Sox on July 26.  Peavy has the lowest ERA in baseball since August 13 with a 1.35 ERA.  Tim Hudson (9-13) will go game 2 for the Giants, he had an ERA of 3.57 this season.  Hudson hasn’t looked himself this season and he’s 39 years old, so this might be his last chance to win the World Series.  Hudson pitched in the playoffs for both Oakland and Atlanta, neither team ever won a playoff series while he was on their staff.  Hudson is 1-3 in his postseason starts with a 3.46 ERA.  Bumgarner will go game three for the Giants.

Washington has one of the better rotations in baseball and have led the majors in ERA since All Star break with a 2.96 ERA.  The Nationals led the league with a team ERA of 3.04 this season.  Steven Strasburg (14-11) will be making his first career postseason start.  Starsburg had a great season with a 3.14 ERA and 242 strikeouts.  Strasburg dominated the Giants the first time he faced them this season, he went six inning and only gave up one run.  He struggled the last time he faced San Francisco, going four innings and giving up five runs on eight hits, but Washington was able to win that game 14-6.  Jordan Zimmermann (14-5) will pitch Game 2 for the Nats, he is coming off the first no hitter in Franchise history on September 28 vs the Marlins.  Zimmermann had anther great season with a 2.66 ERA.  This is Zimmermann second postseason start, he struggled against the Cardinals in 2012 going four innings giving up five runs on seven hits. Doug Fister (16-6) will go Game 3 for the Nats, he has by far had the best season out of the three posting a 2.41 ERA.  Fister has been a good postseason pitcher going 3-2 in seven starts with a 2.98 ERA.

San Francisco finished the regular season fourth in the NL in batting average at .255.  Their offense is headlined by 2012 MVP Buster Posey, who had the best batting average in baseball after the All Star Break at .354.  He came in fourth in the NL batting title race with a .311 batting average.  Pablo Sandoval is another big bat for the Giants, he hit .274 this season with 16 home runs.  Sandoval is currently fifth in the NL against righties hitting .317 against them. Brandon Crawford hit the big Grand Slam for the Giants in their win Wednesday.  Hunter Pence who played in ever game this season will also make an impact, he hit .277 this season.

The Nationals had two players rank in the top 10 in batting average.  Those two players are Denard Span (.302) and Jayson Werth (.294).  They where one of only two teams to achieve that, the other being Pittsburgh.  Adam Laroche led the team in home runs with 26 and RBIs with 92.  Ian Desmond had another big season with 24 home runs and 91 RBIs.  The Nats also had a nice surprise this season with Anthony Rendon who hit .287 this season with 21 home runs and 83 RBIs.  Overall Washington has a well balanced offense that in the top 12 in every major offensive category.

The Giants have one of the better bullpens in all of baseball posting a 3.01 ERA which is the fifth best in the majors.   The Giants have experienced veterans in Santiago Casilla, Jeremy Affeldt, Javier Lopez, and Sergio Romo and it will be tough for any team to score runs of these guys.  Romo had 23 saves with a 3.72 ERA this season.  Casilla was the best in the bullpen for San Francisco this season, with a 1.70 ERA and racking up 19 saves.  Tim Lincecum, who is usually a starter will also be in the bullpen.  With their experience they are the better bullpen.

Washington beat the Giants by one point with a 3.00 ERA to finish the season with the fourth best bullpen.  The Nats are led by Rafael Soriano, who finished the season with 32 saves and a 3.19 ERA.  Drew Storen has continued to be a great setup man, he has not allowed a run in has last 23 appearances since August 5.   Tyler Clippard has also had a great season putting up a 2.18 ERA.

San Francisco struggled this season with injures and it almost cost them the postseason.  Joaquin Arias played in 107 games this season and batter a career-low .254.  He was on the 2012 team that won the World Series.  The Giants bench is young and most of these guys are playing in their first postseason.  I would watch for lefty Travis Ishikawa, he hit .274 in 97 at bats this season, and he might get the start in game 1.

Washington has the active major leader in pinch it home runs in Scott Hairston with 13.  Hairston will bring great experience and a big bat late in the game which will be a huge impact in this series.  Jeff Kobernus gives the Nats a good pinch runner, which is a luxury.  He isn’t a Terrance Gore, but he will still make an impact, Kobernus is also a good fielder.  Kevin Frandsen is the backup outfielder and he hit .259 this season in 220 at bats.

Bruce Bochy is in his eighth season with the Giants, he is 667-629.  Both times he has taken them to the layoffs they have won the World Series.

Nationals manager Matt Williams is in his first season as a manager.  He led the team to a 96-66 record this season.

I think that the experience will pay off for the Giants at the end of the Series, and I think Bochy experience to go with this bullpen will lead them to the series win.