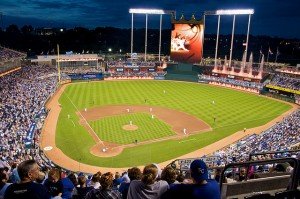 Night view by ian munroe is licensed under CC by 2.0

It’s hard to believe that the season is almost over, the good news is we get to watch two teams in the World Series, that truly play the game the way its suppose to be played.  The Kansas City Royals and the San Francisco Giants, make the first all Wild Card World Series, since 2002 when the Angels played the Giants.  The Angels won that series in seven games, and you can expect this series to be just as thrilling.

The Royals have yet to lose a game this postseason, after playing that thriller against Oakland in the Wild Card Game.  Kansas City has won eight straight, in won in so many different ways.  This is their first postseason appearance, since 1985, which was the last time they won the World Series.  The Royals are built with a great defense, a spectacular bullpen, and speed on the base paths.

It seems like San Francisco wins the World Series every time they make it to the playoffs.  They’re looking for their third title in just five years.  The Giants got into the playoffs after shutting out the Pirates in the Wild Card Game.  The Giants are 8-2 this postseason, and have won with their starting pitching, experienced bullpen, and their timely hitting.

The Giants have a great starting rotation led by Madison Bumgarner, who is 3-1 with a 1.42 ERA this postseason.  Bumgarner has been terrific this postseason and is clearly the number one in the rotation.  He will pitch Game 1 for San Francisco.  The Giants made a huge trade earlier this season to get Jake Peavy, who will pitch Game 2.  Peavy has been spectacular this postseason, going 1-0 with a 1.86 ERA. Peavy will provide the Giants with a quality start and they should expect to get six innings out of him.  Tim Hudson will pitch Game 3, he was solid in the NLDS against the Nationals, giving up one run in 7 1/3 innings.  Hudson got off to a good start in Game 3 of the NLCS, but gave up four runs in 6 1/3 innings.  Ryan Vogelsong has been pitching Game 4, but has struggled this postseason posting a 5.19 ERA.  Vogelsong will probably pitch only if the Giants lead the series come Game 4, if they trail you can expect to see Bumgarner back out there.

Kansas City rotation isn’t as strong as the Giants, but they’ve been solid this postseason.   James Shields will pitch Game 1 for the Royals, he has posted a 5.63 ERA this postseason, with one win.  Shields hasn’t been a solid ace, but the Royals offense has keep him in the game.  Yordano Ventura will pitch Game 2, he was absolutely amazing against the Angels in the ALDS, going seven innings and giving up just one run.  Ventura has posted a 4.84 ERA this postseason, and got a no-decision in both of his starts.  Ventura is a hard throwing righty, with his fastball occasionally reaching 102 mph.  The Royals have yet to announce who will pitch Game 3, but I think it will be Jason Vargas or Jeremy Guthrie will get the go.  Vargas was brilliant in the ALCS clinching Game 4, pitching 5 1/3 and giving up just two hits and a run.  He has a 2.38 ERA this postseason in two starts.  Guthrie only start this postseason was in Game 3 of the ALCS.  He pitched five innings only giving up one run of three hits.

Advantage-Giants (It was close, but Bumgarner gave the Giants the edge)

San Francisco has lived by their pitching, not their hitting.  But, the Giants still have offensive talent led by Buster Posey.  Posey is becoming the new King of October, he is hitting .330 this postseason and has had some key hits.  The Giants as a team have struggled this postseason, hitting .244 as team with a .313 OBP and just five homers.  San Francisco has taken advantage of timely hitting to win games so far.  Pablo Sandoval has had yet another great postseason, he has a .814 OBP and hit .400 in the NLCS.  Sandoval has only one RBI this postseason, and hasn’t hit a homer.  Travis Ishikawa blasted the walk-off home run in Game 5 of the NLCS and he had seven RBIs in the NLCS.  Ishikawa hit .385 in the NLCS, but his defense is a liability.  Brandon Belt will also look to continue his great postseason, the talented first baseman has six RBIs and a homer.  San Francisco will have to rely on their timely hitting and if they miss to many opportunities, might find themselves in a hole they can’t get out of.

The Royals have dominated the base paths this postseason stealing 13 bases, and they’re hitting .259.  Kansas City finished last in the majors with just 95 homers this season, but have found the power this postseason hitting eight homers.  Eric Hosmer and Mike Moustakas have been the stars of the offense so far this postseason.  Hosmer is hitting .448 and Moustakas is tied with Matt Carpenter of the Cardinals for the most homers this postseason, with four.  The top of the order is the bread and butter for the Royals and they rely on them to get on base to score runs.  Leadoff batter Alcides Escobar has a .714 OPS, and the third batter Lorenzo Cain has a .820 OPS.  Add those two players with Nori Aoki equals a dominate top of the order.  Those three players combined had 76 RBIs, during the regular season.  Those three have also combined for 20 runs this season and that mostly due to their ability to get in scoring position.  The middle of the order has done a great job of driving runs in, Billy Butler has five RBIs, Alex Gordon has nine RBIs, and Hosmer has eight RBIs.  Two players have had some dreadful slumps this postseason, Salvador Perez and Omar Infante.  Perez is hitting .118 and Infante is hitting .207.  Perez did come up with that walk-off hit in the Wild Card Game.

The Giants have a veteran bullpen and a manager that know how to use them.  San Francisco has had the best bullpen during the postseason, with a 1.78 ERA in 35 1/3 innings.  The Giants have a great long relief pitcher in Yusmeiro Petit and lefties Javier Lopez and Jeremy Affeldt have been great, each pitcher has only given up two hits and have yet to give up a run.  Closer Santiago Casilla has been dominate with four saves and he’s only gave up two hits.  Hunter Stickland has struggled out of the pen and could be a major liability in this series.  San Francisco also has Tim Lincecum, who has yet to pitch this postseason, they might utilize him in this series.

No bullpen has been as good as the Royals after the sixth inning this postseason.  They are just two points behind the Giants in reliever ERA this postseason, with a 1.80 ERA.  Wade Davis has yet to give up a homer this season, and has been great this postseason, with a 0.96 ERA.  Kelvin Herrera has been great in the seventh inning this season, and has continued that success into the postseason, posting a 1.08 ERA.  The Royals have one of the best closers in the game, Greg Holland, who has a 1.13 ERA and six saves.  If Kansas City has the lead going into the seventh the game is pretty much over.

San Francisco hasn’t used their bench that often this postseason, and other than Michael Morse, have struggled.  Morse, who is 2 for 4 with a homer, will be the designated hitter in Kansas City.  Juan Perez will be the primary pinch hitter, he’s hitting .154 this postseason.  The Giants may utilize Joaquin Arias as a pinch runner.

The Royals will use their bench to steal bases, and they rarely pinch hit.  They have Josh Willingham if they need him.  Willingham has said this will be his last season.  Kansas City will focus on their speed, with Jarrod Dyson usually coming in the game in the seventh to pinch run and play defense.  Terrance Gore is also a major threat on the base paths, he has three stolen bases this postseason.  Gore is possibly one of the fastest players in the game and will be used late in games.

Giants manager Bruce Bochy has been great during the postseason, leading the Giants to win the World Series in their last two postseason appearances.

Royals manager Ned Yost is managing in his first postseason, he is off to the best start a manager can hope for winning his first eight postseason games.

Greg Holland blew the save in the ninth on a pinch hit by Arias to drive in two runs for the Giants.  Casilla got the save on three strikeouts.  Escobar supplied the only runs for the Royals hitting a two run homer.

Guthrie gave up six runs on seven hits in just three innings.  Alex Gordon and Escobar each hit a solo homer.  Hudson pitched eight innings, giving up six hits and two runs.  Pence hit two homers and had four RBIs for the Giants, and Brandon Crawford drove in two runs on a double.

Vargas pitched a complete game shutout, giving up five hits. Hosmer hit a solo homer and Omar Infante had two RBIs for the Royals.  Panik had two hits for the Giants and Vogelsong gave up 5 runs in four innings.

I went with Vargas in Game 7 on three days rest because in the situation I feel like Ned Yost would do the same thing.  The Giants are a predominately lefty team and Vargas will have the best chance to shut them down.