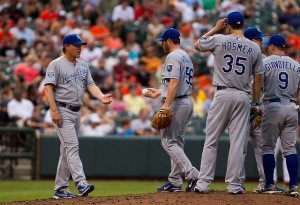 Ned Yost, Greg Holland by Keith Allison is licensed under CC by 2.0

Greg Holland won the Marina Rivera Award today, this is the first year for the award, which is giving to the best closer in the American League.  Craig Kimbrel won the Trevor Hoffman Award, which is the NL equivalent.

This is the first award that the the two time All-Star has won. Holland is a player that has improved every season, and he has played a major role in Kansas City success this season.

Holland was drafted in the 10th round of the 2007 amateur draft by the Royals.

Holland has been the most dominate closer in the American League the last two seasons, posting a 1.44 ERA this season with 46 saves in 48 chances.

The Royals are in the World Series, which gives Holland a chance to win his first World Series this year to go with this award.

Greg Holland is not eligible to be a free agent until 2017, so the Royals will enjoy at least three more season of their star closer.