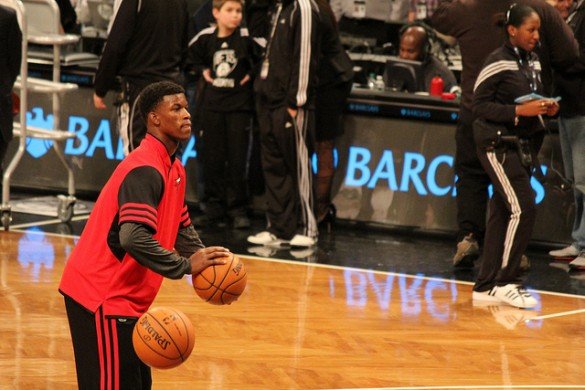 Jimmy Butler by Shinya Suzuki is licensed under CC by 2.0

“His story is one of the most remarkable I’ve seen in all my years of basketball. There were so many times in his life where he was set up to fail. Every time, he overcame just enormous odds. When you talk to him—and he’s hesitant to talk about his life—you just have this feeling that this kid has greatness in him.”

This is the quote from an unnamed NBA general manager ahead of the 2011 NBA draft. Jimmy Butler was taken as the 30th pick in the draft by the Chicago Bulls.

Since then, Jimmy has developed into one of the best 2 guards in the entire NBA.

In his rookie year, Butler averaged 8.5 minutes per game, and did not start any of the 42 games he featured in. This season, he has started all 39 of the Bulls games, averaging 38 minutes each night. That says it all.

The 26 year old is having an incredible season, averaging 22.6 points per game (11th in the NBA); As well as 5 rebounds, 4 assists and just under 2 steals.

In his 39 games so far this season, there have only been 3 games where he has failed to score in double figures. The Bulls know that with Jimmy they have one of the leagues most reliable scorers. Currently being 11th in the league in scoring emphasizes that.

His scoring display on Thursday night caught the eye of everyone in the league. He had 53 points in the win at Philadelphia. Butler had 53, and the rest of the Bulls combined for 60! He had almost half of the points!

Just 2 weeks ago, on January 3rd, he scored 42 points in the win in Toronto. If that wasn’t impressive enough, he only had 2 points at half-time! He scored 40 in one half! Lights out shooting from Jimmy in Toronto!

Where would the Bulls be without Jimmy Butler? They have been impressive this season, and their 23-16 record sits them 3rd in the Eastern Conference behind Cleveland and Toronto. Jimmy has averaged the most minutes for Chicago, with his 38 minutes well above Derrick Rose‘s 32 minutes a night. He is also the leading scorer, and second in assists with his 4.2; Rose has 4.8.

There’s no doubt Jimmy Butler will be at the all-star game next month. Is Jimmy going to keep getting better? Do you think Butler and the Bulls could cause an upset in the post-season against the Cavs? Tweet me your thoughts @tombonnett2

Tweets by @FuelingSports
Is Russell Westbrook the most complete point guard in the NBA?
Team USA Announce initial 30 players for Rio 2016 roster
To Top
Fueled by Sports