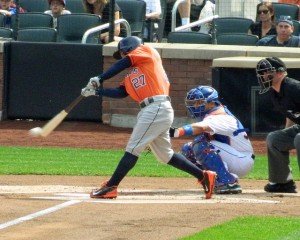 Jose Altuve by Paul Hadsall is licensed under CC by 2.0

Jose Altuve was added to the Astros lineup, after he told them he wanted to play.  Houston originally was going to bench him for the last game of the season to try and preserve his batting title.  Alutve won the batting title going 2-4, with a ground-rule double and a single that drove in a run against the Mets.  He was the first player in Astros history to win the batting title, which is pretty amazing with how many great players have come through the organization.

Alutve ends the season with 225 hits and a .341 batting average, he led the league in both categories.  Alutve beat out Victor Martinez who went 0-3 in his game against the Twins, he finished with a .335 batting average.

Alutve went 0-3 in Saturday’s game which is why they talked about benching him, but Alutve was prepared to play.  You have to admire him for not taking any handouts, he went out there and earned it.  Alutve played in 157 of the 162 games this season, he was also second in the league in at bats with 660.  Ian Kinsler finished in first with 684 at bats.

Jose Altuve is a fun player to watch, and is just 24 years old, so you have to think that he can win a few more batting titles. The Astros have Altuve under contract thru the 2017 season, with a team option in 2018 and 2019.