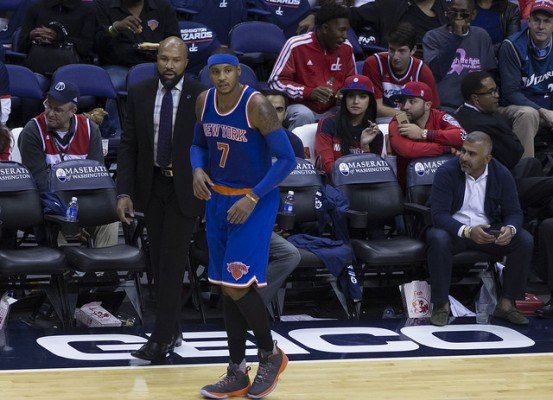 Carmelo Anthony by Keith Allison is licensed under CC by 2.0

Carmelo Anthony put up 28 points in last nights win, including 5 three’s. He shot 50% from the field. Melo also had 7 rebounds and 3 assists on the night.

Rookie Kristaps Porzingis had 19, including 3 of 4 shooting from behind the arc. The 7 foot 3 forward also had 10 rebounds, managing yet another double-double. The Latvian also had one assist and 2 blocks.

Arron Afflalo managed 18 on the night from 7 of 11 shooting.

Now they’re not the Gasol brothers, but Robin and Brook Lopezstarted against each other in Madison Square Garden, and it was the Knicks big man Robin who came out on top with the W, despite his brother scoring 21 points, compared to his 7.

The game was well and truly over after the first as the Knicks stormed out the gates with 42 points in the opening quarter. Brooklyn managed just half of that with 21.

This match-up is questionable whether it is a true rivalry, as New Jersey moved to Brooklyn only 3 years ago. The rivalry is yet to catch on with the Knicks fans.

Next up for the Knicks they’re taking on the Bucks in Milwaukee tonight. The match-up to watch is between Carmelo Anthony and Giannis Antetokounmpo.