Memories of "Madhouse on Madison Street": The Chicago Stadium - Fueled by Sports 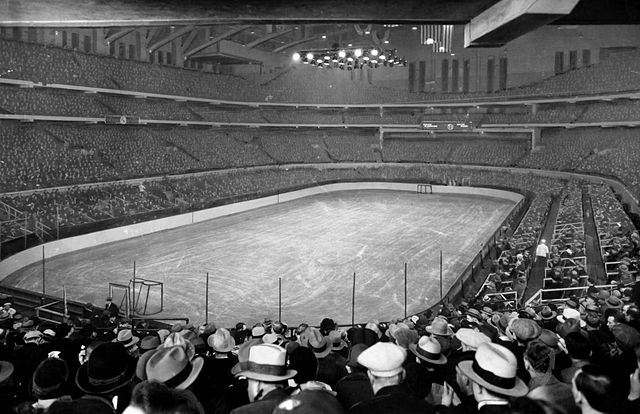 Michael Jordan loved to play in the old barn–the  Chicago Stadium. Bobby Hull of the Chicago Blackhawks flashed down the ice with his golden hair and Stan Mikita, the wizard of the ice, made so many flashy and quick plays for the Hawks.

The Chicago Stadium has seen Presidents nominated, including the time when Eleanor Roosevelt went to the arena in a last ditch effort to save her husbands’s nomination in 1940. She gave a heartfelt speech before the unruly delegates, and FDR got the Democratic nomination.

As a former Chicagoan, I’ve been to the Stadium numerous time. I’d say honestly, I’ve seen more hockey games than Bulls games. Each event was pretty neat for an avid young sports fan.  The ‘Hawks had won the Stanley Cup in 1961 and with Hull, Mikita, and Goalie Glenn Hall in net, they were always a good draw. The Bulls had some very good years in the 70’s with Chet Walker and Bob Love, but they became the toast of the town when Jordan came to the Bulls and he started to weave his magic.

Chicago Stadium was a loud place to see a game. For a hockey game, one of the first things you noticed was the piercing sound of the organ.  It was a big one, it had 6 keyboards and 800 stops and was played for years by Al Melgard.  Nancy Faust, the Chicago White Sox organist also played there.

During the winter, you’d walk up steps to seats high above the ice and were looking down straight at the ice. Sitting in these rows of seats with the cigarette smoke billowing up to the upper reaches of the arena.  There you could see the massive scoreboard for hockey games with circles and arrows moving around for the penalties. It was so big you could have fit 3 people for a space launch.  There was a buzz in the crowd every time Bobby Hull touched the puck as if the crowd hoped this would be the time he would score, as he often did. I was at a game when he scored a milestone goal, maybe his 600th of his career. The PA announcer, likely Harvey Wittenberg, who had this distinct monotone voice that penetrated the arena like a judge making an important announcement at court. He would say, “Blackhawk goal scored by #9, Bobby Hull, unassisted at 6:13.” I liked to hear his voice so much that whenever some player scored, I would listen closely.

During the years, a tradition started, it might have been during the Gulf War, when fans stood and cheered as Wayne Messmer sang the National Anthem before a hockey game. When he got to “And the rockets red glare” the stadium went nuts. You could hardly hear. It was so amazing. I’d think it had to effect the players on the ice, especially the Hawks. They often got off to fast starts and I think the passions of the crowd spurred the home team.

In 1971, the Hawks had a good team and defeated the NY Rangers in a game 7. The place was rocking. So much so that CBS-TV announcer Dan Kelly exclaimed, “I can feel the broadcast booth shaking–that’s the kind of place Chicago Stadium is right now!”

I remember seeing a Knicks vs. Bulls game when Rick Pitino coached the Knicks. Doug Collins was coaching Chicago and Michael was coming into his own. Charles Oakley at that time, was playing for Chicago before he switched to the Knicks and helped that team with Pat Riley as the coach.  Everytime Jordan scored it was a “picture” moment and this was years before the “selfie.”

In 1992, the Hawks played in the Stanley Cup Finals and the Bulls beat Portland in the NBA Finals. The Bulls won the title in the Stadium with MJ dancing on the courtside tables.  Yes, the Stadium has seen many great moments, and I was lucky enough to see a few of them.