Michigan RB Derrick Green out for season - Fueled by Sports 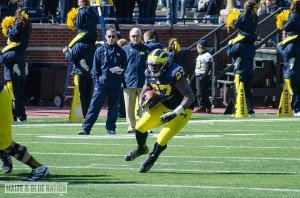 Derrick Green by Brad Muckenthaler is licensed under CC by 2.0

This has already been a rough season for the Michigan Wolverines and it got a lot worse today.  Michigan announced that starting running back Derrick Green would miss the rest of the season with a broken clavicle.  He was the team’s leading rusher through six games with 471 yards on 82 carries.  Green was injured during the fourth quarter Saturday against the Rutgers.  The Wolverines lost the game 26-24, to fall to 2-4 this season, this has already been a tough season and it will only get tougher.

Green, who is a sophomore is staying positive accruing to Michigan head coach Brady Hoke.  The Wolverines will now have turn to another sophomore in De’Veon Smith and redshirt junior Justice Hayes.  They will split the carries to finish out the season, the two players combined have 383 yards this season on 66 carries.  Smith does lead the team in rushing touchdowns with four.

This could also be a chance for some younger players to step up.  I would also watch out for redshirt sophomore Drake Johnson.  Johnson was a three start out of high school and was apart of Michigan 2012 recruiting class.

Derrick Green was a former five star in the 2013 class and will be a huge loss for the Wolverines.  Hopefully Green will have a speedy recovery and be right back with Michigan to start the 2015 season.  Michigan fans are already looking forward to next season, and hopefully this team can put it together because they have the talent to compete for a spot in the playoffs.

Michigan plays at home this week against Penn State.  The Wolverines will look to avoid losing their fifth game this season.  This is Michigan worse start since 2008 when they went 3-9.