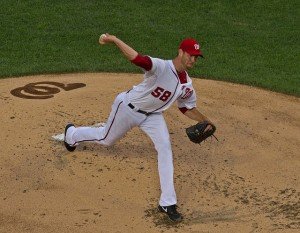 Doug Fister by David is licensed under CC by 2.0

Madison Bumgarner pitched seven innings giving up three runs, two of them where earned.  Bumgarner had a key error in the seventh inning that cost the Giants the game.  With a runner on first and second, Wilson Ramos bunted a sacrifice to Bumgarner. The throw to third sailed on Pablo Sandoval outreached glove and rolled to the left field tarp. Trainers had to rush out to Sandoval who was hurt after doing the splits to try and save the throw.  Both runners to score and Ramos advanced to second.  Asdrubal Cabrera than hit a double, which allowed Ramos to score to give the Nationals a 3-0 lead.

Bryce Harper would pad the Nationals lead with a solo home run in the ninth to make it 4-0.  It was Harper second home run of the postseason.

Sandoval would lead off the bottom of the ninth with a single and Hunter Pence would follow with a double.  Brandon Crawford would drive Sandoval in on a sac fly to give the Giants their first and last run of the game.  San Francisco left seven on base and where 0-6 with runners in scoring positions.