Notre Dame comes back to beat Stanford - Fueled by Sports 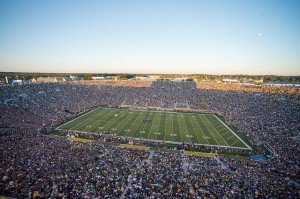 Notre Dame Stadium by Chairman of the Joint Chiefs of Staff is licensed under CC by 2.0

Everett Golson hit Senior tight end Ben Koyack for a 23 yard touchdown with 1:01 left in the game to give #9 Notre Dame a 17-14 lead on #14 Stanford.  It was Notre Dame first lead of the game.  The Cardinals where unable to score again falling for the second time this season to a top 15 team.  The Irish improved to 5-0 on the season and are in great shape to jump up in to the top five after four of the top six teams went down.  Stanford is now 3-2, with both of their being by three points.

Everett Golson continued his stellar season, by completing 20 of his 43 passes for 240 yards against Stanford SEC like defense.  Golson threw for two touchdown passes and did make one mistake throwing an interception in the second quarter, he also fumbled the ball once.  Chris Brown caught four passes for 60 yards and he scored a touchdown.  Notre Dame had 370 yards of total offense, that is the most that Stanford defense has given up this season.

Kevin Hogan struggled for the Cardinals completing 18 of this 36 attempts for just 158 yards.  He threw two interceptions, with one of them coming with Stanford driving and on Notre Dame nine yard line.  The offense was non existent for Stanford, if this team wants to have a chance in the Pac 12 north they will need to find ways to score.  They can’t continue to rely on their defense to win them the game.  Remound Wright led the Cardinals in rushing with 29 yards on eight carries and a touchdown.  Hogan scored the other touchdown for Stanford on a 10 yard run.  The Cardinals played another undisciplined game with nine penalties resulting in 66 yards.  Both teams struggled on third down, but I think you have to give credit to both defenses as they came to play.

Stanford will host Washington State Friday and looks to get back to their winning ways.

Notre Dame will host North Carolina next week.  The Irish can’t get caught looking ahead, as they got #1 Florida State the following week.