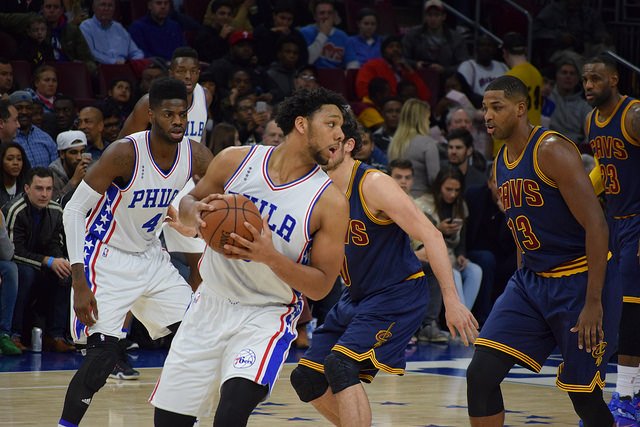 Jahlil Okafor‘s trade to the Nets was probably the most well received NBA trade in the Twitter era.

The #FreeOkafor saga has come to an end as he makes the switch to the Nets along with Nik Stauskas (also a nice pick up for Brooklyn) and a second round pick, in exchange for Trevor Booker.

A trade for Okafor has been long overdue, as he was simply abandoned from Philly’s long term vision to focus on Embiid.

But the 21-year-old is heading to a team full of players with a point to prove. It’s a combination of players who have been deemed as ‘second choice’, and now they can join forces to cause big problems in the weakened Eastern Conference.

It’s crazy that Okafor and Russell were both abandoned so quickly. It sums up the NBA nowadays. No instant success? You’re getting replaced.

Magic Johnson put his eggs in Lavar’s basket by going forward with Lonzo instead of D’Angelo (how’s that working for you Magic?). Russell is a proven offensive threat and going in to his third season was bound to improve further. But with Lonzo waiting in the wings, Russell was shipped along with the ‘washed’ Timofey Mozgov.

A similar situation occured to Okafor, but instead Embiid returned from the NBA ruins to bring some life back to Philadelphia.

Don’t get me wrong, Joel Embiid is a terrific Center and if he can stay healthy, Philly have something special going on. But with minutes restrictions and having to sit games, surely Okafor could have been a really valuable asset to them? I don’t understand why Brett Brown didn’t make use of him.

Either way, they both join forces with other players who’s careers are considering to be on the decline, such as DeMarre Carroll, Tyler Zeller and Mozgov in Brooklyn.

Along with Allen Crabbe and other guys they already had like Jeremy Lin and Caris LeVert (who is the perfect bench player), this team has the pieces in place to win basketball games.

Credit where it’s due to the Nets front office. They have turned a disaster from those before them, into something that could make them a real force down the line. They now have multiple players in the roster who were first round picks, with the most recent being Jarrett Allen, who was the 22nd pick in 2017.

With only one more season with no picks, the Nets finally have hope. A bunch of guys with a point to prove. ‘Brooklyn grit’ is real. They are slowly gaining support from NBA fans around the league who want to see them do well, and they deserve it.

I can’t wait to see Okafor ball out for Brooklyn, especially when Russell is back in the line-up. With the Eastern conference weakened this season, they could be a real problem when they are all healthy, especially a couple of years down the line as the young guys begin to enter their prime.

The success won’t be instant, but if they carry on down this path, it’s only a matter of time before they are back in Playoff contention.

They have made the best out of a horrible situation. Let’s hope it works out in the end for the Nets.