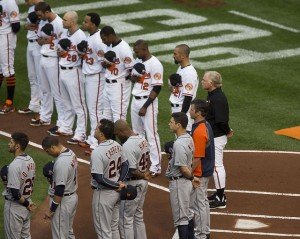 Baltimore Orioles, Detroit Tigers by Keith Allison is licensed under CC by 2.0

The Tigers had no answer for the high power Baltimore offense.  The Orioles blew out Detroit 12-3, and the Tigers where in the game till the big Baltimore eight inning.

The game got started fast when Chris Tillman struck out the Tigers first three batters, all swinging.  In the bottom of the inning Nick Markakis led off with a single, and Nelson Cruz hit a shot in to the right field bleachers to give them the 2-0 lead.  Detroit followed that up with back to back home runs by Victor Martinez and J.D. Martinez.  Markakis drove in Ryan Flaherty in the bottom of the inning to give the Orioles a 3-2 lead.

The score stayed the same till the bottom of the seventh when JJ Hardy hit a solo home run to give the Orioles a 4-2 lead.  Miguel Cabrera answered that with a home run in the top of the eighth to cut the Oriole lead to 4-3.

Than the bottom of the eighth happened.  Baltimore would score eight runs, bring 14 batters to the plate, and get six hits in the inning.  Alejandro De Aza had two doubles in the inning, those where his only hits of the game.

Baltimore ended the game with 12 hits, led by the big bat of Nelson Cruz, who continues to be menace for opposing teams in the playoffs.  Cruz scored two runs, and had three RBIs to go with his first inning home run.  Chris Tillman also looked sharp in the win going five innings, giving up two earned runs, and striking out six.  Coming into the game I said the Baltimore bullpen would be a key for Baltimore to win this series, and I was right at least in Game 1.

It was a disappointing night for the Tigers, who struggled at the plate.  They did hit three home runs, but the problem was all three of them where solo.  Detroit didn’t have any extra base hits other than the home runs.  Andrew Romine was the only player on the Tigers with two hits in the game, but he did strikeout twice.  In total Detroit struck out ten times.  The Tigers are a very good team and aren’t out of this series yet.