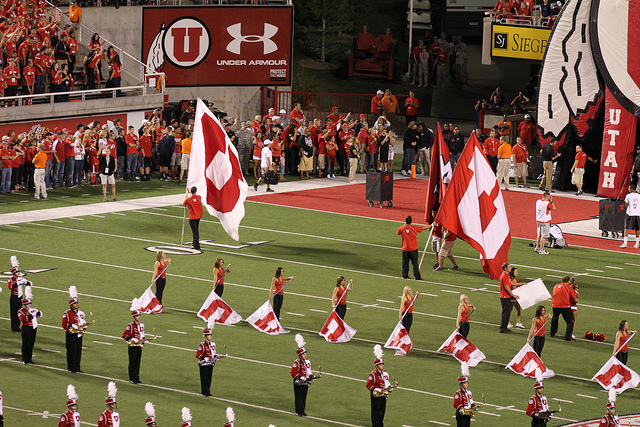 Utes vs Cougars by the_robio is licensed under CC by 2.0

Utah is coming off an overtime loss to Arizona State and will have to Oregon this week.  The Ducks are ranked fourth in the country, and blowout Stanford a week ago.  Oregon has continued to have a high power offense, and they are averaging around 45 points per game.  Heisman candidate, Marcus Mariota led the way for Oregon.  Mariota is just four touchdown passes away from 30 on the season, and he has just thrown two interceptions all season.   Utah has the top defense in the Pac-12 in my opinion, but they will have a tough time stopping the balanced Oregon offense.  I got the Ducks pulling out a close one on the road.

Arizona State and Notre Dame play this weekend, and the loser will be eliminated from playoff contention.  Arizona State defense  has been spectacular the last three weeks, only giving up 36 points during that span.  The Sun Devils will have a tough time stopping Notre Dame though this week.  The Fighting Irish are averaging around 35 points per game.  Senior quarterback Everett Golson has been great this year, with 22 touchdown passes and over 2,300 yards passing.  I expect Golson to lead the Irish to a victory late in the fourth.

Overall this is a good week in the Pac-12, and you should except some tightly contested games.