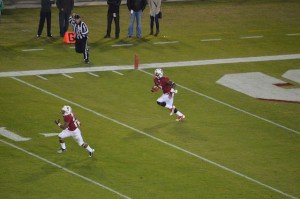 Stanford vs Notre Dame by Daniel Hartwig is licensed under CC by 2.0

The Pac-12 has a few good games this week, but #20 USC at #19 Utah is the game of the week.  Utah comes into the game with the 22nd ranked offense and are 5-1, with their only lose coming to Washington State by one point.  USC is having a good season, and looks to win their third straight game.  Junior quarterback Cody Kessler is having an amazing season, with 18 touchdown passes and just one interception.  This should be a very good game and should tell us just how good each team really is.

Oregon State at Stanford is another good game this week.  Stanford offense has been absolutely awful this season and they are currently 99 in the country in points per game.  Their defense is second in the country and is the only reason this team still has a winning record.  The Cardinals defense has only allowed over 20 points once this season, and that was last week to #14 Arizona State.  Oregon State is 4-2, with both of their loses coming to ranked teams, but their four wins came to mediocre teams.

Washington host #14 Arizona State this week, like Oregon State, Washington has only beat medicare teams this season, with both of their loses coming to ranked teams.  Arizona State has a high powered offense, that is ranked 18th in the country.  I expect the Sun Devils to win this game by double digits.

Oregon faces California Friday, in a battle of high powered offenses.  Cal is ranked 10th in the country averaging 41.6 points per game and Oregon is ranked 6th averaging 43.6 points per game.  Oregon is clearly the better team, with their only lose coming at home against Arizona.  Cal also played at Arizona and lost 49-45, on a last second Hail Mary.  The Bears allowed 36 points in the fourth quarter.  If Cal can play this game like they did in the first three quarters of the Arizona game, they will have a chance, but if they don’t it will be a blowout.