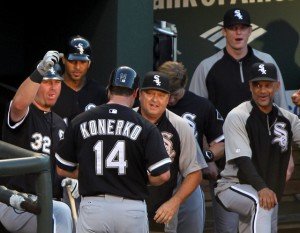 Paul Konerko by Keith Allison is licensed under CC by 2.0

Paul Konerko hasn’t got the attention he deserves this season, with Derek Jeter retiring.  I think Konerko liked it that way though, he had a very unusual career and in my opinion is worthy of the hall of fame.  Everybody remembers Konerko playing for the White Sox, but what most people don’t know is that Chicago was his third team.  Konerko was drafted 13th overall by the Los Angeles Dodgers in the 1994 MLB Draft.  While in the minors he was part of a 21 inning game, and he was the only player to drive in a run.  He is one of three Dodger players to win the Dodger’s  “Minor League Player of the Year Award” the other two players are Billy Ashely and Joc Pederson.

Konerko was the team captain for the White Sox from 2006 till his retirement in 2014.  He had a career batting average of .279, he had 2,340 career hits, 439 home runs, and 1, 412 RBIs.  He was a six time All Star, a World Series Champion in 2005, ALCS MVP in the same year, and the AL Comeback Player of the Year in 2004.  Konerko played in 2,268 games for the White Sox, that is the second most in the organization history to only  Luke Appling’s 2,422.  Konerko is third in White Sox history in career hits with 2,292.  Second in home runs with 432, Hall of Famer Frank Thomas is the only player ahead of him with 448.  Konerko ranks in the top ten in almost every batting category in Chicago history.  He’s one of ten players, who played mostly first base, to be in the 400-home run club, and 400-double club.  The White Sox will greatly miss his leadership and his ability to hit the baseball.  The others are Jimmie Foxx, Lou Gehrig, Eddie Murray, Jeff Bagwell, Fred McGriff, Carlos Delgado, Rafael Palmerio, Jason Giambi, and Albert Pujols.  I would say Konerko is in great company there.

Konerko played very little in the big leagues with the Dodgers in 1997 and 1998 getting 151 at bats.  He was trade to the Cincinnati Reds in 1998 for All Star closer Jeff Shaw.  The Reds turned around and traded him in the 1998 offseason to the White Sox for Mike Cameron.  Konerko would go on to spend 16 consecutive seasons with the White Sox.   Konkero is one of three players to spend 16 or more seasons with one team and spend fewer than 100 games with two or more other teams.  The other two where Phil Niekro (he spent 21 years with the Braves, he also played for the Yankees, Indians and Blue Jays) and Don Sutton (who played for the Dodgers for 16 seasons, he also played for the Astros, Brewers, A’s, and Angels). 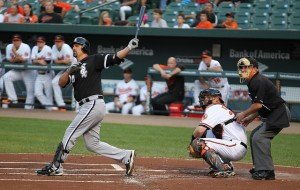 Paul Konerko by Keith Allison is licensed under CC by 2.0

Paul Konerko first full season with the White Sox was in 1999, he had a .294 batting average and 24 home runs.  The next season Chicago made the playoffs, for the first time since 1993.  They got swept by the Mariners in the ALDS and Konerko went 0-9.

Konerko and the White Sox would make the playoffs again in 2005 and this time they shocked everyone.  The White Sox won the ALCS in five games and where on their way to their first World Series since 1959, and they where set to face the Houston Astros.  The only big hit that Konerko would have in that series was in Game 2 with the White Sox down 4-2, he hit a Grand Slam to give them the 6-4 lead.  They went on to win the game 7-6 you never know what could have happened if Konerko didn’t hit that Grand Slam.  The White Sox would go on to sweep Houston in win the World Series, it was Konerko his only championship.

Konerko had an underrated career in my opinion, these days it is rear for a player to play for one team for so long.  In my opinion Konerko should be elected to the Hall of Fame, it probably won’t be the first ballot, but I do think he gets in.

Konerko was the last player left on the White Sox from the 2005 championship team.