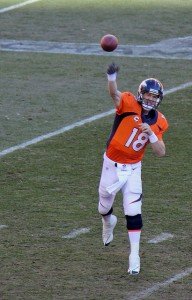 Peyton Manning by Jeffrey Beall is licensed under CC by 2.0

One of the greatest quarterbacks of our time achieved another great milestone.  Peyton Manning passed for this 500th career touchdown Sunday against the Arizona Cardinals.  It came on a third-and-goal from the 7-yard line, with Denver’s tight end Julius Thomas catching the pass in the end zone as he ran toward the sideline.  That play made Peyton Manning only the second quarterback ever to reach the 500 touchdown mark and it took him 244 games.  The other quarterback is Brett Favre who had 508 career touchdowns.

It was Manning’s 101st touchdown with the Denver Broncos, he signed with them in 2012.  He had 399 touchdown passes in 14 seasons with the Colts.  Manning threw 55 touchdown passes last season, which broke Tom Brady 2007 record of 50.  Brady had broke Manning previous record of 49 which he set in 2004.  Manning should break in the next fews weeks, I know that it’s not guaranteed, but come on it’s Peyton Manning.

Manning is currently second in career passing yards with 65,778, he trail only Brett Favre 71,838 yards.  It would take Manning at least one more season after this one to catch that record.

Manning has a lot of records already under his belt and he is currently tied for first with Dan Marino for Game-Winning drives at 50.  Manning has still only won one Super Bowl and I think he will play till he wins another.  A few of the greatest quarterbacks struggled to achieve the ultimate prize more than once.  Marino never won a Super Bowl and Favre only won one.

Manning finished the game throwing for 479 yards and four touchdowns.  He will go into next weeks game against the Jets with 503 career touchdown passes.