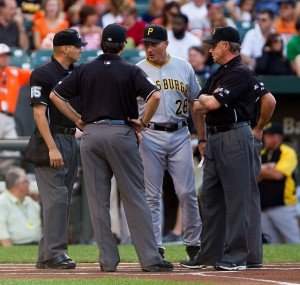 Jeff Banister by Keith Allison is licensed under CC by 2.0

The Texas Rangers have hired Jeff Banister, 49, he had been in the Pirates organization for 29 years.  Texas choose Banister over Rangers interim manager Tim Bogar, who most people considered the favorite after Ron Washington resigned on September 5th.

Jeff Banister was drafted in the 24th round by the Pirates in the 1986 amateur draft, he played his college ball at the University of Houston.

Banister only had one career major league at bat, and ended his career with a perfect batting average of 1.000.  Banister got a pinch hit single in 1991 against the Braves, beating out a throw from Jeff Blauser.

The Pirates sent Banister back down to the minors, where he would eventually become a player-coach for the Carolina Mudcats.  From 1994 till 1999, Banister was a coach on four different minor league teams in the Pirates organization.  He managed the Welland Pirates in 1994, in 1995 he coached the Augusta Green Jackets and led them to the South Atlantic championship.  In 1996 till 1997, he managed the Lynchburg Hillcats, and then midway thru the 1997 season, the Carolina Mudcats named him their manager.

On August 8, 2010, after Gary Varsho was fired by the Pirates, they named Banister the interim bench coach.  Clint Hurdle became the manager and liked the work of Banister and named him the full time bench coach.

After coaching for over 20 years, and only getting one big league at bat, Banister is becoming the manager of the Texas Rangers.  His journey has been a long one, but he’s finally made it, and I wish him the best and hope he does well.  He already has the roster to win the World Series, but the Rangers are still lacking.  Texas will need to add some pitching, and if they can stay healthy will be a very dangerous team next season.  The Rangers are in the best division in baseball, and will have three other great teams to compete with next season.

Banister been through a lot, he survived bone cancer and osteomyelitis (infection of the bone or bone marrow).   Banister was catching at Lee Junior College in Texas, when he broke his neck on a home plate collision.  It paralyzed him for 10 days and crushed three vertebrae.  He’s been through a lot and I think he will strive as a big league manager.

Tweets by @FuelingSports
Giants beat Cardinals! One win away from World Series
Giants Win the Pennant!
To Top
Fueled by Sports