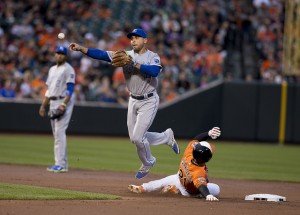 Omar Infante by Keith Allison is licensed under CC by 2.0

The Royals continued their dominant postseason, beating the Orioles 6-4 to take a 2-0 lead in the American League Championship Series.  Kansas City is now 6-0 in this postseason and are the hottest team out of the four left.  Now the series will head to Kansas City, no team has ever lost a League Championship Series after winning the first two games on the road.  The Orioles hadn’t lost two in a row at home since June 28-29.  The Orioles are seeking their first pennant since 1983 and will now have to make history to achieve that, with the way this team has played anything is possible.

Alcides Escobar drove the go-ahead run in, doubling down the right field line, driving Terrance Gore in.  Lorenzo Cain helped pad that lead by driving Escobar in on a single.  Mike Moustakas hit a home run for the third straight game, and he has now hit one in four of the six games this postseason.  Moustakas is now tied with Willie Aikens for most home runs by a Royals player in a postseason. Moustakas also had a key sacrifice bunt that put Terrance Gore in scoring position. Lorenzo Cain finished with four hits, drove in one run, and scored twice.  Cain became only the second player in Royals postseason history to have a four hit game.  The other guy that did it is rather popular around those parts, George Brett, he did it twice in Game 3 of the 1985 ALCS and again in the clinching Game 7 of the World Series.  Yordano Ventura pitched 5 2/3 innings giving up four runs.  He left with an injury, but is not expected to miss his next start.

Bud Norris struggled today for the Orioles, giving up four runs on nine hits in 4 1/3 innings.  The 2-3-4 hitters each had two hits for Baltimore.  Adam Jones hit a home run in the third inning off Ventura which tied up the game at three.  Nelson Cruz continued his great postseason, with two hits and a RBI.

The Orioles pitching staff has struggled the first two games giving up a combined 14 runs.  Baltimore will need a huge outing form Chen to stay alive in this series, a loss pretty much guarantees their out.  The only team to ever go down 3-0 and come back and win, was the 2004 Boston Red Sox who came back against the Yankees.